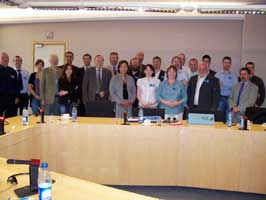 A Sinn Féin delegation hosted by Mary Lou McDonald MEP travelled to Brussels last week to discuss the issue of safety and health at work with MEPs, European Trade Unionists and EU officials.

The delegation included representatives from UCATT, MANDATE, SIPTU, Belfast Trades Council and the IWU as well as Sinn Féin representatives Jonathan O'Brien, Killian Forde and Martin Meehan and other party activists. Members of the Justice for Justin Foley Campaign also travelled to Brussels to highlight the case of the young Dublin man who died at work in 2002.

The initiative formed part of Sinn Féin's capaign to eliminate workplace accidents and stress in the workplace which has been pursued in the Dáil and which saw the party mobilise for Workers' Memorial Day in April.

Laurijssen, Sapir and Reibsch were at pains to make the members of the delegation aware of the pressure currently being exerted within the EU to reduce employment regulations and the implications this has in terms of regulations covering health and safety at work. The present moves to amend the Working Time Directive to increase the maximum working week from 48 hours to 63 hours and the dropping of any reference to solar radiation from the proposed Directive on protection from optical radiation in the workplace were given as illustrations of a wider push towards deregulation.

Following a briefing by Mary Lou McDonald on the work of the Employment and Social Affairs Committee, the delegation met Irish and Trade Union Intergroup MEPs on to discuss Corporate Manslaughter.

While the delegation met Sinn Féin MEP Bairbre de Brun and Independent MEP Kathy Sinnott there was particular annoyance at the failure of other Irish MEP's to meet the families of the two young men killed in workplace accidents.

The delegation met officials from the European Commission's Directorate-General for Employment, Social Affairs and Equal Opportunities. The bureaucratic and frustrating nature of the EU was evident throughout the meeting as the officials dodged and evaded answering questions on issues such as the worrying drive to reduce protective regulation relating to health and safety, the necessity to do more to address work related stress and the Commission's position on the demand for the introduction of corporate manslaughter legislation. The case for this was forcefully made by Lauren Foley, sister of Justin Foley who was killed in a workplace accident for which no one was held accountable. She also pressed the officials for the European Commission to lend its support to International Workers' Memorial Day in future.