Safety in the workplace: Foley family face brick wall in search for justice 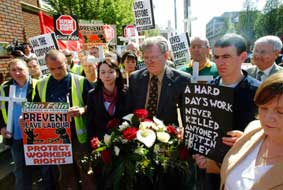 Justin Foley lost his life in December 2002 at Dublin's Ballymun Industrial Estate. His death could have been prevented if the most basic health and safety legislation had been complied with by the company involved. Here, STEPHANIE LORD speaks to Justin Foley's sister Lauren about the brick wall his family has faced in its struggle for justice.

Justin Foley, employed as a transport clerk with Davies-Turner, was killed instantly as he tried to help a truck into the loading bay in which he was standing. As if coping with this tragic loss was not bad enough his family have been held up at every corner by the very people with the statutory power to investigate and prevent such things from happening again.

Regulations exist to say that in the event of a workplace fatality, the Health and Safety Authority (HSA) must be notified immediately and the Garda must preserve the scene for three days or until the HSA arrive. The Health and Safety authority in this case, was not notified until the following day. When officials arrived at the scene, it had been cleared up. Gardai had not instructed that the scene was to be preserved. However the HSA has never said that the Gardaí were at fault.

Justin Foley's sister Lauren outlined how a number of months after Justin's funeral a Garda arrived to the family home late one evening and informed them that they would have to attend the Coroner's Court the next day. At the inquest, without the family having been informed, photographs from the scene were produced. It was a cause of extreme distress.

Just days prior to the fatal accident, the Health and Safety Authority had visited the premises on a "spot-check" and made a number of recommendations that were never implemented.

When the Authority belatedly announced that its report on Foley's death was ready, the family were made to apply for it under the Freedom of Information Act, which they received in July 2003.

The problem with the report is that the Inspector who drew it up arrived after the scene had been cleared up. This is presumably why it states that it is impossible to know the reasons for Foley's death. There are numerous questions to be answered with regard to ramps and chains used on the loading bay. The report states that there were three companies involved in the accident- Foley's employer, the company who owned the loading bay and the company who owned the lorry.

Following receipt of the HSA report, the Foley family solicitor sent a structural engineer to examine the premises and took with him photographs taken by the HSA Inspector. But he found that the whole site, including the loading bay had been remodelled.

After this the family asked the HSA to reopen Justin's case so that unanswered questions surrounding his death could be addressed. At this point the HSA informed them that if they wanted to do this they only had one year from the date of the accident to appeal the conclusions of a HSA report.

Lauren Foley started the Justice for Justin Campaign to highlight the difficulties facing families who have lost members in workplace accidents. "There should really be more support for families put in this situation. They shouldn't have to do all the 'finding out'. The entire onus is put on the grieving family. It is hard enough having to cope with the loss of a family member but then you are faced with the complex state of the legal system in this area", Lauren Foley said.

She would like to see a massive change to the way the HSA deals with workplace fatalities: "There should be people in the HSA dedicated to dealing with these issues and that are trained properly to deal with the families, we shouldn't have to be the ones to find out where to get the information, the HSA should just tell us".

Lauren Foley also expressed disappointment at the fact that prosecutions against companies by the Health and Safety Authority are rarely taken. "What they're doing is just not good enough. If legislation is breached and no prosecution is taken, it only leads you to believe that the law in this area means nothing and that's appalling. What good is having these procedures if they are not being used?"

• The "Justice for Justin" Campaign can be accessed at: http://www.justinfoley.ie