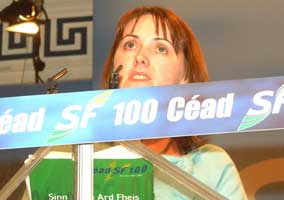 Child of '69 seeks to encourage next generation

Born in 1969 in republican Springhill, West Belfast, Margaret Adams' father, from Pomeroy, County Tyrone and her mother, from Churchill Estate in Belfast's New Lodge, were both republican, as were her seven brothers and five sisters.

Three of Margaret's brothers were imprisoned in Long Kesh, along with her sister Eileen, who served two five-year sentences in Armagh. "My sister and brothers going to jail had a big impact".

A lot about Adams' life overlaps with republicanism, right down to the fateful year she was born -1969. Her mother was pregnant with Margaret when the family were put out of their home on the Old Lodge Road, North Belfast during the unionist pogroms. The family then moved to Springhill.

Following school, at 17 she started to work as an administrator for different companies, acquiring skills which would later serve her in her role as a Sinn Féin's National Treasurer - a position she holds jointly with Treasa Quinn.

While Adams' family history impacted on her decision to become actively involved in Sinn Féin at the age of 22, local activists like John Leathem and Fra Mc Cann also had a big influence, encouraging her at every turn.

Margaret Adams has three children, all boys, and her vision for young republicans is reflected in her approach to raising her children. "I would actively encourage my own son, the oldest one to be aware, familiar with the past and yet progressive and to think about the future."

Asked if there was any one particular incident that impacted upon her as a republican she identified the death of her brother in law. "During the Hunger Strike my sister's husband Matt McLarnon was shot dead on the same day that Francis Hughes died."

Adams was 11-years -old in 1981. "That always stands out in my mind and after that my brother went to jail, sentenced to life. It had a roll-on effect. I stayed on at school until I was 17 and then I went to work. But there was always something pulling you back to where you came from, what your family were and then there was Gilbraltar."

Her sister Eileen had been in jail with Mairéad Farrell. Margaret also reflected with sadness on the recent deaths of Marie Wright and Siobhán O' Hanlon - "great people" she said.

After the birth of her oldest son, Margaret joined the Bun Na Bhfál Sinn Féin Cumann. Gerrry O' Hara, the Cuige chair asked me to work in the Six County office on a full time basis. Her work involved " a mixture of stuff - secretary to Cúige na Sé Chontae, administration and finance work. That's where I started to move into a middle leadership position with the finance work increasing over the years and then I ended up as National Treasurer. Two treasurers are elected to the officer board - myself and Treasa Quinn."

The role of National Treasurer involves various responsibilities under the direction of the party's Ard Comhairle. "Treasa deals with finance around Leinster house and finances in the 26 Counties. We in the Finance Department in the Six Counties deal with the Assembly and different day-to-day issues like supporting grassroots republicans in various fundraising projects like the National Draw, involvement with Cáirde Shinn Féin and Le Chéile - a project designed to honour long standing republican activists."

Adams is very happy in her work. "I love the job, the organisation, dealing with people and the people I work with. You deal with party members on a daily basis, lending advice on whatever financial challenges they might be facing - if for instance they wanted to buy their office - or helping young people, or people who have just come into the party."

"You need a combination of skills, a good way with people and a knowledge of finances".

She has never personally encountered gender discrimination within Sinn Féin, but highly commends the work around gender equality as headed up by Eibhlin Glenholmes. "It's a good piece of work, important in that it encourages young women into the party". Asked if there had been any one particular female republican who impressed her, she identified former General Secretary Lucilita Breathnach, another person who has done a great deal of work around the gender issue. For Adams " The party, the organisation overall is family-friendly. It's a matter of women having the confidence to come forward."

She emphasises the importance of identifying young women for roles of responsibility throughout the party and spoke of the importance of facilitating hands-on training, so that people like herself could pass on skills to a new generation.