Review of Hain Assembly: Sinn Féin will not participate in farce 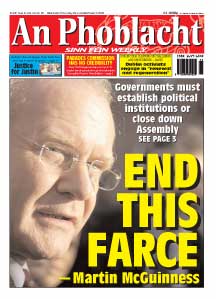 Sinn Féin Chief Negotiator Martin McGuinness said on Wednesday that what the Taoiseach and British Prime Minister would say and do on Thursday would obviously influence the Sinn Féin review of its approach to the Hain Assembly.

McGuinness was speaking as the Sinn Féin national officer board and the party's negotiations team met in Dundalk to begin the process of reviewing its position regarding further participation in the Hain Assembly. There will also be meetings of the Sinn Féin Assembly team. The party's Ard Chomhairle is meeting on 15 July. The review process is expected to conclude at the end of the summer.

McGuinness said that Sinn Féin was committed to seeing the Good Friday Agreement fully implemented. "We stated at the outset of this six-week phase that we would do everything in our power to see a fully functioning Assembly and Executive put in place. This remains our goal and the purpose behind this review process is to establish whether the current approach being adopted by the governments can ever deliver this.

"To date, over the past six weeks the DUP have once again set about the task of blocking progress. They have been aided in this by the approach of the two governments.

"Sinn Féin will not allow ourselves to take part in a farce. Other parties have allowed themselves to be used by the DUP as part of their strategy to deliver a talking shop Assembly with no real power. The future participation of Sinn Féin in the Hain Assembly approach is entirely dependent on the actions and attitude of the two governments in the coming days and weeks.

"The Taoiseach and British Prime Minister are in Stormont tomorrow. What they say and do will obviously influence the ongoing Sinn Féin review. They need to state clearly that they are finally going to reassert their control over this process and press ahead with either putting in place the political institutions or closing down the Assembly and moving on before public confidence in the political process is eroded even further.

"Sinn Féin's discussions will continue on Friday when the party's Leinster House team will meet with Gerry Adams and Conor Murphy in South Armagh to reflect on what the two governments have said the previous day", McGuinness said.

"We are coming to the end of the six-week sitting of the Hain Assembly and we need to recognise that no progress has been made. The DUP have shown no interest in sharing power and have been allowed by the two governments to prevent progress being made. The political process will be in serious trouble unless Tony Blair and Bertie Ahern take decisive action when they come to Belfast.

"Sinn Féin wants to see fully functioning political institutions restored and we are doing everything that we can to make this happen. For the last six weeks all of the parties in the Assembly, with the exception of the DUP, have been attempting to get the political institutions back up and running. But the reality is that there has been no progress. In fact the DUP are now even less engaged in the political process than they were before. The DUP have shown no interest in being involved in power sharing institutions and have stated publicity on numerous occasions that they couldn't care less about the 24 November deadline.

"The British Prime Minister Tony Blair and the Taoiseach Bertie Ahern will travel to the North next week. The next phase of the process will be defined by what they say and more importantly what they do. If there is to be any possibility of the power sharing institutions being restored in the coming months there is a need for them to take decisive action. There is no point in them coming to Belfast to give the parties a pep talk or to pretend that progress has been made in recent weeks. They need to acknowledge that the current situation is totally unacceptable and is dangerously undermining the public's confidence.

"I am calling on the governments to use the opportunity to set out in detail how they now intend to move forward. No party should be allowed to block or delay progress."