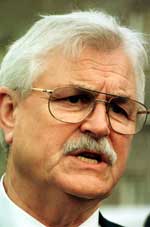 One man's UDR was another man's UVF

Ken Maginnis (now Lord Maginnis of Drumglass), a founder member of the discredited and disbanded Ulster Defence Regiment militia, used to be RTÉ's favourite unionist until Jeffrey Donaldson (another ex-UDR man) appeared on the scene. Cuddly Ken showed his loyal UDR colours when challenged about ongoing revelations that Downing Street knew as far back as 1973 that his regiment was riddled with soldiers who were also active in UVF and UDA death squads.

Ken, who served in the UDR from 1971 until he left with the rank of major in 1981, was very relaxed about a 1973 Whitehall report marked "Secret" and titled Subversion in the UDR.

"It's not as simple as 'was there collusion?'.

"One of the problems is that one man's collusion is another man's anti-terrorist activity."

Major Maginnis used to be the Ulster Unionist Party's spokesperson on security and "anti-terrorist activity".

Wasn't it ironic that the PDs, Fine Gael and Pat Rabbitte's Labour Party were falling over themselves, patting each other on the back for the very successful Dáil debate on EU Day last week when EU Commissioner Marian Fischer Boel addressed the full Oireachtas?

As Sinn Féin's international affairs spokesperson, Aengus Ó Snodaigh TD, pointed out, Commissioner Boel is an unelected, political appointee; Sinn Féin MPs and MLAs in the Six Counties, on the other hand, are elected by Irish citizens and yet denied a voice by the PDs, FG and Labour in the Oireachtas.

Núl points, for the conservative Dáil parties there.

"So now that we have had EU Day and everybody involved seems to be exceptionally pleased with themselves. Can we now look forward and finally agree to regular All-Ireland Days based on the proposals previously brought forward by the Taoiseach allowing for Northern representation in the Dáil?"

"They would certainly offer better protection than utility bills or passports, which don't have addresses."

But ID cards wouldn't have addresses either, unless the Labour/Fine Gael security police are going to issue people with a new one every time they move.

One of Dr Norman Kember's colleagues was executed before the 74-year-old was rescued by British forces after four months in captivity. But Kember got no sympathy from the RIR colonel.

"He was out hob-nobbing with the Sunni extremists and he got what he deserved- what is known as a Baghdad Haircut," Collins sniggered in an address to the Oxford Union.

"He was very lucky to get out. The simple fact of the matter is that it was bloody naive. If you go looking for trouble, you find it."

Undoubtedly not a sentiment that Collins conveys to the families of British Army soldiers killed in Iraq.

Richard Barnbrook has begrudgingly admitted directing HMS Discovery: A Love Story, a film he made in 1989 which contains long scenes of men undressing and fondling each other, a naked man doing things to another man, and a lot of whipping of bare bottoms and waving of the Royal Navy flag, the White Ensign.

The BNP's election manifesto labelled homosexuality "an unhealthy practice... wrong and unhealthy for any community".

BNP boneheads back in the Barking führer bunker have embarked on their own voyage of discovery into Bulldog Barnbrook's arthouse past.