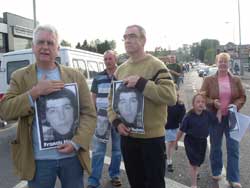 I visited six of the Hunger Strikers in the prison hospital. On Friday, 5 May on the 25th anniversary of Bobby Sands' death the three of us stood in the prison hospital corridor and identified the cells we were confident the lads died in. We did not know which cells Patsy O'Hara, Martin Hurson, Joe Mc Donnell and Mickey Devine died in.

Laurence is almost certain Mickey Devine died in cell 5, where Kevin died. The prison service claims they do not have records of the cell numbers where the men died.I find this hard to believe.

We are by nature curious and such facts like identifying which cells the hunger strikers died in is an important part of the story of the Hunger Strike. This information is especially important now because the prison hospital is a listed building. It forms the centre piece of the tour which is on offer to those visiting the prison.

To mark Bobby's anniversary a group of us held a short ceremony in his cell. We also held a minute silence in each of the cells where the lads died. In Bobby's cell Tom Hartley spoke briefly and recalled the agony of the times for the Hunger Strikers and their families. He described 1981 as a defining year in the freedom struggle and in the lives of those close to the Hunger Strikers.

Danny Morrison read an extract from one of Bobby's poems and his diary which he kept in the early stages of his hunger strike.

Jake Jackson, a close comrade of Bobby's spoke in Irish, Bobby's first language inside the jail.

Michelle Gildernew, MP for Fermanagh/South Tyrone, the seat held by Bobby when he died, spoke of the honour it was to follow in Bobby's footsteps and of how proud she was that the people of her constituency stood with the prisoners when those with power and influence had abandoned them.

As we moved from cell to cell someone from the group who knew would say who died there. From Bobby's cell we walked a few feet across a small corridor to cell 7. A voice recorded "we don't know who died here". We held a minute silence. In a zig-zag fashion we covered the ground of the prison corridor heavy under foot and heavy of heart.

Onto Cell 4 and the burden of the ceremony began taking its toll: "We don't know who died here" was lower in tone as some stayed in the corridor to compose themselves.

In Cell 3 I said: "Francis died here". I could see the faces of those around his cell search out a memory of him. For me I saw him in his bed with his mother and brother Oliver by his side.

In cell 2 Bik said "Kieran died here" and I added softly "so did Raymond" as we stood in silence before going to the last cell. There in Cell 1 it was left to me to complete the painful odyssey: "Tom died here". A sigh greeted the minute's silence. We quickly departed to different parts of the prison hospital to be alone with our experience.

It was emotionally very difficult because most of those at the ceremony were very close to events either inside the jail like Bik McFarlane, O/C of the prisoners or Martin McGuinness in the leadership of the movement at the time.

This is the first year since the Hunger Strikes, 25 years ago, that ex-prisoners and members of the Sinn Féin leadership have been able to pay their respects to the Hunger Strikers inside the cells where they died.