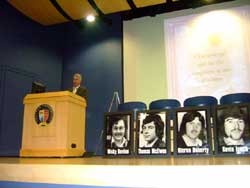 The 25th anniversary of the death on hunger strike of Francis Hughes was marked by vigils and commemorations across Ireland last weekend. Hughes was the second man to die on the 1981 H-Block Hunger Strike.

Speaking last Friday, Sinn Féin MP for Mid-Ulster Martin McGuinness said: "Twenty five years ago today Francis Hughes, one of the most fearless and courageous IRA Volunteers to emerge out of the current phase in the republican struggle, lost his life after 59 days on Hunger Strike in Long Kesh.

"The sacrifice of Francis Hughes and the other H-Block Hunger Strikers remains with all of us to this day. I remember travelling to Bellaghy to give the oration at the graveside of Francis Hughes. I recall the RUC disrupting the funeral. I also recall the dignity displayed by the Hughes family and by those republicans from throughout Ireland and beyond who had gathered in South Derry in the face of their provocation."

McGuinness said the struggle has changed greatly since the difficult summer of 1981 but that republicans remain committed to their goals and to delivering the sort of society which is demanded by the sacrifice of the Hunger Strikers. He encouraged people to get involved in commeorative events "to remember our comrades who died in 1981 and build the sort of Ireland which is peaceful, free, united and democratic".

Vigils were held in many locations on Friday 12 May the anniversary of Francis Hughes' death. The following Sunday, 14 May hundreds of people gathered at his graveside in Bellaghy, South Derry to remember a hero, a friend and a comrade. They stood in solidarity with the Hughes family and the family of Tom McElwee who also died on the 1981 Hunger Strike. Francie and Tom were cousins whose families lived close to each other in the townland of Tamlaghtduff.

In his oration at the graveside of Hughes and McElwee, Sinn Féin's Francie Molloy described Hughes as a gentle giant. Speaking euphemistically of the time when "Francie used to spend his holidays" with the Molloy's, he recalled the days when Hughes, on the run, was the man most wanted by the crown forces in the Six Counties. The greater their efforts to capture him, the more his legend grew.

As was apparent in Bellaghy last weekend, the 25th anniversary of the Hunger Strikes is witnessing an intense mobilisation of republican former prisoners. Of the people who filed into Bellaghy churchyard last Sunday many were many former Blanketmen. Women who had endured the protest in Armagh prison were there too.

Sinn Féin Dublin South West TD Seán Crowe spoke at a Hunger Strike Commemoration in Seattle on Thursday 4 May. Attended by a large crowd, the event at Seattle University, also heard from speakers who described the conditions in Ireland at the time of the Hunger Strike. Describing the mood in Dublin at the news of Bobby Sands' death he said: "It was clear that the people supported the Hunger Strikers. They did not consider the prisoners to be criminals".

McMullan said republicanism in Ireland has never been stronger. "It's on the march. "Men and women came out of prison and re-joined the struggle, and the vast majority are still involved", he said.

He also reminded those present that, in addition to Long Kesh, there had been significant hunger strikes in Portlaoise, Limerick, Crumlin Road in Belfast, and in England some of which involved the force-feeding of participants.

The struggle and sacrifice of the hunger strikes, he added, has been imprinted on the history Ireland he said. "It was a watershed event. British rule in Ireland was once again exposed as a criminal act,"

But he added:"our objectives have still not been realised, and the need for solidarity still applies."