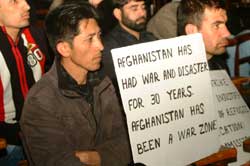 Doolan said: "Even on a cursory look at the situation in Afghanistan, from this remove, it is plain to see that it is not a functioning democratic society. There is a puppet regime in place that has no control over the vast bulk of the country with the result that violence and terror are an everyday reality for much of the population."

Doolan said that with a widespread view that the asylum process is flawed, the cases of these protesters needed to be looked at again. "This state also needs to implement the EU directive, which instructs member states to provide complementary protections to individuals who fall outside the strict legal definitions of what constitutes a person as a refugee."

As An Phoblacht goes to press it has emerged that officials from the Department of Justice have had a two hour meeting with the protesters following which the men have started taking water. The Department insists that it will not negotiate their status and the men continue to refuse food. Sinn Féin Dublin City Councillor, Daithí Doolan has welcomed the ending of the thirst strike