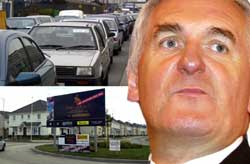 Taosieach Bertie Ahern's recent announcement of a crusade on "active citizenship" is farcical argues CAOILFHIONN NI DHONNABHAIN because it is his own Government's policies that are fuelling civic disengagement.

In recent months Taoiseach Bertie Ahern has embarked on what has been described in the media as an "active citizenship crusade". Ahern has appointed a Taskforce on Active Citizenship consisting of representatives from political, religious and civic backgrounds. The Task Force has been given nine months to produce a report aimed at helping shape public policy in a way which facilitates and encourages greater engagement by people in all aspects of life, as well as promoting a strong civic culture.

It is farcical for Ahern who defends at every opportunity the policies of his Government which have contributed to civic disengagement to now declare, on the eve of a general election, his intention to launch a crusade on active citizenship. The establishment of the taskforce is undoubtedly an attempt to ward off an imminent backlash from voters against the fruits of two terms of a Fianna Fáil PD government- rampant consumerism, lengthy commutes, urban sprawl, absence of balance between work and family life, and a growing sense of alienation and isolation in the community.

Ahern invited author of Bowling Alone Robert Putman to address a recent Fianna Fáil think-in. In Bowling Alone Putman shows how Americans have become increasingly disconnected from one another and how social structures have disintegrated. One wonders if Ahern has actually given much consideration to the findings of the American sociologist.

When recently questioned on the increasingly worrying growth of house prices, Bertie Ahern stated that he believed there was no great problem in the property market, that we should not be concerning ourselves about the relentless rise in borrowing for overpriced houses. Both Ahern and his Government have, during the last nine years in office, demonstrated that they are impervious to the plight of first time buyers who cannot buy homes within their own communities as house prices continue to soar. They are unconcerned about the social consequences of ongoing escalation of house prices. Existing communities are being destroyed and family bonds are loosened as younger generations are forced away from their extended families, further out into the ever expanding commuter belt. Social networks are broken down by the dispersion of people out of existing Dublin communities into the commuter belt. In the coming years we will find that the older people left within the city area will not have the support networks around them because their children were forced to move away by the property prices which Fianna Fáil refused to tackle. This will contribute to increased isolation and loneliness amongst the elderly. The sprawl into which increasing numbers of people are forced to live is associated with social segregation and social homogeneity and is considered to be a significant factor in reducing incentives for civic involvement as well as opportunities for social networks that cut across class lines.

As the number of people undertaking ever longer commutes to work continue to rise, has Ahern taken on board Putnam's finding that the car and commuter culture are demonstrably bad for community life? Putnam has pointed to evidence that suggests that each additional ten minutes in daily commuting time cuts involvement in community affairs by 10 per cent. He also demonstrates how spatial fragmentation between home and workplace is bad for community

Pressures of time and money including the particular pressure on two career families, contribute to the diminution of our social and community involvement. In Ireland today it is impossible for the vast majority of people to purchase a home unless both partners work.

The family itself is a key form of social capital. Yet under the Fianna Fáil PD administration new fathers do not have an entitlement to any paternity leave when their child is born. Maternity and Parental Leave entitlements are grossly inadequate to enable parents time to look after their children in the early years of their lives.

This government's policies deny people the right and ability to balance their work life with home life, family responsibility and leisure time. Work life balance is essential in order for people to play a part in their community. An absence of work life balance results in people having too little time for leisure activities, voluntary work, political activity, civic responsibilities and social contact. The 26 counties Central Statistics Office's most recent Quarterly National Household Survey revealed that 80% of the workforce was being denied flexible working arrangements by their employers.

Over the last nine years the values promoted by the Fianna Fáil/PD Government are consumerism and individualism. As Bertie Ahern reaches for the fig leaf that is the Taskforce on Active Citizenship we should not forget that the Government of which he is the head has used its time in office to actively pursue policies which are destroying the social fabric of communities and which have produced increased levels of inequality.

Political and economic ideologies have social consequences. If your political and economic ideologies promote individualism and consumerism you cannot feign surprise when this is what you get in social terms. While the Taoiseach remains committed to the policies and ideology currently being pursued by his government it can only be concluded that the crusade is merely a charade.

But maybe we are missing the point behind Ahern's sudden anxiety regarding the decline in volunteerism. Is it perhaps that Ahern's true motivation is a desire to offload social services to the voluntary sector? After all voluntary action and philanthropy has long been promoted by the right in the context of efforts to rundown public sector services, implement benefit cutbacks and forward the privatisation agenda.