Health for All - National Day of Action 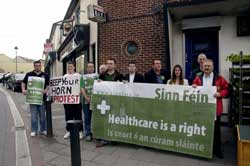 Sinn Féin staged a Day-of-Action on Saturday, 13 May highlighting the crisis in healthcare provision. Over 50 protests took place across the country from Donegal to Kerry, and from Wexford to Dungannon.

Speaking at a protest in Dublin city centre Sinn Féin Chairperson Mary Lou McDonald MEP said: "The issue of health goes to the very core of our society, to the values and principles that make us who we are. We believe that healthcare is a right and should not depend on your ability to pay or where you live. We will be bringing this campaign to every county in Ireland in the coming months and will be making it a priority in the run up to the next election."

McDonald said people had just come through one of the worst winters in recent years for Accident and Emergency units with up to 490 people per day waiting on trolleys and chairs at its worst.

"Sinn Féin's message is very straightforward. We believe that healthcare is a right, which should be provided on the basis of need alone and not depend on your ability to pay or where you live. We are totally opposed to the grossly unequal, two tier system being pursued by this government where those who can afford it can get the best care quickly", she said adding that the Day-of-Action is part of a wider campaign which will include meetings with health workers and unions to discuss the proposals set out in Sinn Féin's 'Healthcare in an Ireland of equals' policy document, public meetings and the distribution of hundreds of thousands of newsletters, leaflets and posters. The campaign will be brought to every county and will form a central part of Sinn Féin's campaign in the run up to the next election.