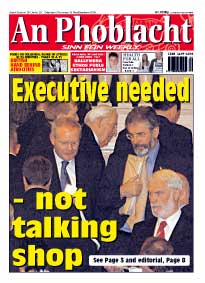 Sinn Féin refused to partake in a sham debate at Peter Hain's assembly in Stormont on Tuesday. Party President Gerry Adams said the debate amounted to no more than a talking shop and re-iterated the demand for the primary political focus to be on the formation of a fully functioning Executive which had the power to tackle the range of issues affecting the people.

The assembly convened at Stormont on Monday with the North's 108 MLAs attending the first sitting. Proceedings began with a minute's silence in memory of murdered Ballymena teenager Michael McIlveen.

A decision by PUP leader David Ervine to register as a member of the Ulster Unionist Assembly group provoked DUP anger and a new threat to the prospect of power-sharing because of the PUP's link to the illegal, paramilitary UVF.

Confirming that Sinn Féin would not be in the chamber to discuss a motion brought forward by British Secretary of State Peter Hain, Gerry Adams said: "Sinn Féin's clear reason for taking part in this Peter Hain Assembly is to bring about the formation of the Executive. This afternoon's session is not about this because of the DUP's refusal to accept their responsibilities at this time. So Sinn Féin will not be in the chamber today."

Sinn Féin did attend a meeting with the Business Alliance which Gerry Adams said had been a useful engagement. "But the Hain Assembly has no Executive. It has no ministers and it has no power. The Assembly can only take real decisions - on the economy, on rates, on water charges, on education and on health - if the Executive is formed. That is the business that we should be conducting today. Instead we have a talking shop", he said.

Meanwhile Sinn Féin West Tyrone MLA Barry McElduff has said that the participation of the SDLP in Tuesday's proceedings at Stormont was a serious mistake that provided the DUP with a comfort blanket. "Meaningless debates that are ignored will only delay the day when we get an Executive. Yesterday the SDLP provided a comfort blanket for the DUP. It was nothing more than a bit of occupational therapy for MLA's when what we should be doing is taking Executive decisions about how to tackle the lack of occupational therapists in the real world", he said.

"The SDLP said that they would not take part in 'Wendy House' debates, yet at the first opportunity this is exactly what they have done. If this debate was as important as the SDLP claim why was SDLP leader Mark Durkan absent?

"Mickey Mouse debates in the Hain Assembly will not change how British direct rule ministers make decisions. It was a serious mistake by the SDLP to participate in this sham debate when even business leaders made it clear in the morning that we need sustainable accountable local government", said McElduff.

"The economy remains one of the most important issues that a full Assembly and Executive must address as a matter of urgency within an agreed programme for government. The only way to address the short-termism and failures of British direct rule is to get local ministers who are accountable taking these decisions", he said.

During a presentation by the Business Alliance on the Economy at Stormont Sinn Féin's Economic Spokesperson, Mitchel McLaughlin MLA appealed to the business sector to use its influence to convince the DUP of the need to establish fully functioning political institutions.

McLaughlin told the Alliance that if the economy in the Six Counties is to prosper, it could only do so in an All Ireland context. He welcomed the fact that increasingly political and economic opinion throughout Ireland was seriously examining this argument. "But it is self-evident that without the re-establishment of a fully functioning Executive, parties are powerless to make the decisions required to address your concerns. The opportunity for the economic development of the Six counties, as an integral part of an island economy, has come onto the agenda in the context of the Good Friday Agreement, the work of InterTradeIreland, and the potential in the Common Chapter. Essentially the way forward is mapped out", he said, adding that the real question was whether there was the collective will to go for it.

He appealed to the Alliance to use whatever influence it had to convince DUP leaders to participate in the Institutions of the Good Friday Agreement on the basis of equality. "Exercising a negative veto on politics in the North is doing irreparable damage to the economy and social fabric", he said.