SF to put Dáil motion on sale of historic documents 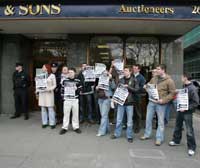 Following last week's controversial auction of historical artefacts connected to the 1916 Rising, including an origional copy of Amhrán na bhFiann, the national anthem, Dublin MEP Mary Lou McDonald has said that Sinn Féin will forward a Dáil motion demanding legislation to prevent the sale or export of important historical documents.

"Many people were very angry to see irreplaceable historical documents sold off to the highest bidder in an auction hall in Dublin city centre yesterday. Such documents are vital to future generations and should be kept in the ownership of the people", McDonald said.

"Under current legislation the Government is able to compulsory purchase items such as the Ardagh Chalice, Tara brooch and paintings of national importance. The owners of these items are compensated by the state. However there is no legislation for the government to do this with written documents or archives.

"Sinn Féin TDs intend to table an emergency Dáil motion to demand legislation to prevent the sale or export of such irreplaceable and significant documents or artefacts", she said.