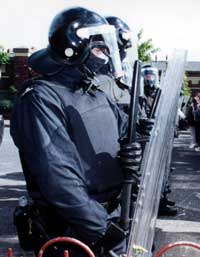 An investigation by the Ombudsman has been launched in the wake of a fatal shooting of the driver of a stolen vehicle at the weekend. 23-year-old Stephen Colwell was shot twice in the chest after PSNI officers opened fire in Ballynahinch at around 11am of Sunday.

Colwell, believe to be originally from the Shankill area of West Belfast, had been the driver of a stolen BMW carrying five other passengers, three males and two females. The BMW had been reported stolen from the Bishopscourt area of County Down earlier that morning.

The circumstances surrounding the fatal shooting remain unclear. The PSNI have claimed that shots were fired after the vehicle Colwell was driving failed to stop at a roadblock in Church Street. Other witnesses claim Colwell was shot as he attempted to run away from the stolen vehicle.

The fact that none of the other passengers were injured and the BMW did not appear to have crashed as a result of the driver being shot dead, suggests that the vehicle was not travelling at speed at the time.

It is also not known if the PSNI officers involved in the shooting shouted a warning before opening fire or if the vehicle posed any kind of immediate threat. Failure to stop at a roadblock is a classic justification most often evoked following a shoot to kill operation.

A 'roadblock' suggests an evident objective phenomenon which to 'drive through' further suggests a deliberate act of provocation on the part of the driver. And yet a PSNI patrol can simply 'declare' a 'roadblock' at will. The actual nature of a declared roadblock is rarely questioned.

Last month no one was injured when the PSNI opened fire on a suspect car on the Glen Road in West Belfast. In 2003 the PSNI killed 21-year-old Neil McConville and seriously wounded the driver of the vehicle in Lisburn, County Antrim. Speaking to the media Colette McConville said there were real similarities between the death in Ballynahinch and her son's killing two years earlier.

"In both cases the PSNI opened fire needlessly on a car. Both my son's and that other lad's death were avoidable had the PSNI not been so trigger-happy," said Colette.

"When Neil was killed, the PSNI said the car he was in had smashed through a roadblock. I now know that was a lie. I would tell the family of the young lad killed on Sunday not to believe everything they are hearing at the moment," she said.