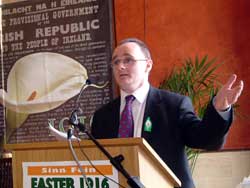 Sinn Féin held it's second Easter Commemoration in the Long Gallery in Stormont on Thursday 13 April.

Against a backdrop of the 1916 Proclamation West Tyrone MLA Barry McElduff gave the main oration. Addressing a packed hall McElduff highlighted the hypocrisy of successive Dublin governments who were always ready to pay lip service to the republican ideal yet refused to challenge the British over their continued occupation of the Six Counties.

He also pointed out the irony of republicans holding an Easter remembrance ceremony in what was once the seat of unionist power, "a place from where the orders were sent out to the RUC to arrest republicans and stop them remembering the Rising and the sacrifices of the heroes of 1916".

However, republicans from all generatons and from across the Six Counties filled the hall. Traditional music was played by a number of musicians led by Dungiven's Francie Brolly.

Armagh MLA Pat O'Rawe addressed the gathering while Michelle Gildernew read the Democratic Programme of the First Dáil, a programme that set out the radical republican intention of claiming the wealth and land of Ireland for the betterment of the people of Ireland.

The event was dedicated to the memory of Sinn Féin stalwart Siobhán O' Hanolan.

Barry McElduff said: "It is fitting that republicans from the length and breadth of Ireland have come together to honour those who gave their lives for Irish freedom.

"Stormont is full of the echoes and resonance of unionist domination. A time when unionists wouldn't have a fenian about the place. A place where unionists abused power for decades. Today I am proud to be an unrepentant fenian here and proud to remember Ireland's patriot dead in the company of so many republicans.

"It was at Stormont that unionists tried to ban Easter commemorations. Here today is proof that they failed. The inspiration given today to young men and women is as strong as it was 90 years ago when the men and women of 1916 rose up and proclaimed a 32 county republic. Against all the odds it was a triumph of the human spirit over oppression and adversity.

"We pay tribute to them all. But today a new generation, like the generations before, have taken up the gauntlet and risen to the challenge of the unfinished business of creating an Ireland of Equals.

"Indeed it contains a powerful message to unionism about the intention of republicans. Yes, we are unashamedly for Irish Unity. And yes, we want to build a society of equals that is free from sectarianism and bigotry. Can unionis rise to this challenge? Unionists need to rise to the challenge of building a future for Planter, Gael, New Citizen and Dissenter by working in government with Sinn Féin."