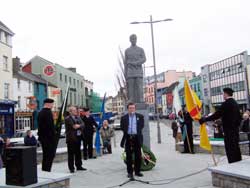 Easter Sunday in Galway city provided an interesting snapshot of Irish politics on the 90th anniversary of the Easter Rising. The redesigned and refurbished Eyre Square - An Fhaiche Mhór - had just been opened. The work took far too long, was grossly over-priced and the project was a prime example of Celtic Tiger profiteering and incompetent management. That said, the finished square is as fine a public space as we have in this country. One end of it provided the stage for the political events of the day.

The new setting for the statue of Liam Mellows is now a natural gathering place for rallies. Galway Sinn Féin Councillor Danny Callinane and myself arrived there for the start of the commemoration organised by the city's vibrant anti-war movement. Abubaker Deghayes, whose brother was detained in Guantanamo Bay for four years, spoke to the crowd of his pride in marking the Rising as a blow against imperialism. 'Mise Iaráic' ('I am Iraq') said one of the posters - echoing Pearse's poem 'Mise Éire'.

When the rally ended, the Fianna Fáil parade approached and the members of the Government party were embarrassed at the continuing presence of placards reminding them of how they besmirch the memory of the men and women of 1916 by their collaboration with the US war in Iraq.

By 3pm it was time for the Sinn Féin commemoration. The few FFers who remained on the square must have been further discomforted when they saw that our commemoration attracted a larger and younger crowd. And of course there would have been no Fianna Fáil commemoration if it were not for the growing strength of Sinn Féin in County Galway. The same applies throughout the 26 Counties.

For the same reason the Fianna Fáil/PD government decided to revive the Easter military parade it abandoned in 1970. No-one believes otherwise than that this was done in an effort to repaint Fianna Fáil a brighter shade of green in the hope that it will dazzle voters who might defect to Sinn Féin. Therein lies a dilemma for this Government as it did for previous Irish governments. On the one hand they don't want to be seen to 'abandon' 1916 to Sinn Féin. On the other hand reminding people about the Easter Rising encourages them to actually read the Proclamation and the writings of the leaders and to assess how Ireland today measures up to their ideals.

Previous governments responded in different ways. In 1966 they made the 50th anniversary a celebration of the 26-County state. By 1976 the wheel had turned full circle and the repressive Fine Gael/Labour government had no state commemoration and banned the Sinn Féin event. Among those prosecuted for defying the ban was James Connolly's daughter Nora Connolly O'Brien.

Under the banner of Reclaim the Spirit of 1916 a national celebration was held in Dublin and locally in 1991 to mark the 75th anniversary, embarrassing the Government into organising a virtual drive-by wreath-laying at the GPO. Since then republicans have been calling for an appropriate commemoration organized by the State. Sinn Féin has urged an inclusive people's celebration.

All parties, including Sinn Féin were represented at the State event in Dublin last Sunday. That the 90th anniversary should be so marked was right and proper and it was entirely appropriate that Sinn Féin representatives Seán Crowe TD, Pat Doherty MP, Michelle Gildernew MP and Arthur Morgan TD took their places on the reviewing stand. It was a reminder of the strength of Sinn Féin. Some media tried to portray the non-attendance of Sinn Féin President Gerry Adams and Dáil leader Caoimhghin Ó Caoláin as some form of boycott. On the contrary, both were engaged to speak at two of the largest Easter commemorations in the country on Easter Sunday - Belfast and Drumboe respectively.

It was significant that the FF/PD government placed so much emphasis on the military aspect of the parade and presented it as a tribute to the Defence Forces. This was a convenient way of avoiding the political message of the Rising and the Proclamation and its relevance for today. But the decision of the Government to hold a commemoration provoked months of debate, led to widespread media coverage, boosted sales of new and republished books on the Rising and will have encouraged many young people to rediscover Pearse and Connolly and Markievicz. This can only benefit Irish Republicanism and the Sinn Féin project.