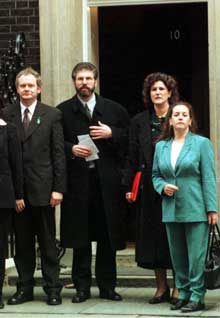 Sinn Féin President Gerry Adams MP has expressed deepest condolences to the family of Siobhán O'Hanlon who died during Tuesday night last after a long battle against cancer.

Mr. Adams said: "Siobhán was a kind and gentle woman who cared deeply about her family and friends. She was also a committed republican activist. Her stamina, forthrightness and determination in pursuing issues is legendary. Siobhán never allowed her illness, which she battled with a determination which amazed and impressed all who knew her, to distract her from her work. She continued that work right up until very recently.

"Siobhán was a close friend and an invaluable comrade. I have known her for many years. For the last 15 years she was the lynchpin around which my office functioned. For much of that time she was also the point of contact between us and the British and Irish governments. She also headed up Sinn Féin's South African desk.

"Siobhán was also an integral part of the renewal of Sinn Féin in Belfast, particularly in the west of the City. She also played a key role in successive and successful election campaigns in the north of the City.

"Féile an Phobail is the largest community festival on these islands and its success was in no small part down to the central part she played in helping to organise and plan its programme of work. Without her input Féile could not have reached its potential.

"As well as that she assisted numerous local people who sought our help.

"Easter is a poignant time for republicans. This Easter will be more so for all of us who knew, loved and respected Siobhán. I want to extend the sympathy of Irish republicans everywhere to Pat and Cormac, to Siobhán's mother Tess, and the O'Hanlon and Sheehan families.