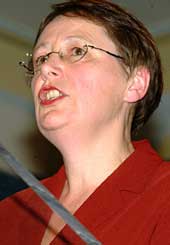 I spoke in a debate regarding workers' rights and urged the European Parliament to remove restrictions placed on migrant workers and allow for the free movement of workers right across the EU.

The Irish experience has been overwhelmingly positive, with migrant workers contributing to society and enriching the cultural fabric of the nation. However, we must go further than merely calling for free movement of labour. We must defend the rights of those workers to equal treatment. We cannot ignore the issue of employment conditions and the continued exploitation of workers. Even in Ireland unscrupulous employers have used the lack of free movement of workers within the EU to introduce discrimination as regards salaries and working conditions based on nationality. We must combat this strongly. We must also oppose restrictions on social security and other social protections.

The European Commissioner for the Internal Market Charlie McCreevy presented the European Parliament with a revised proposal regarding the controversial EU Services Directive. The fact that Commissioner McCreevy has wholeheartedly endorsed the view of the European Parliament on the controversial EU Services Directive should give the Socialist Group and Labour‚s Pronsias De Rossa pause for thought. The revised Commission proposal will still leave workers across Europe in competition with each other in a 'race to the bottom'. Apart from a certain number of exceptions the rules of the market and free and unfettered competition will take precedence over social protection. Fortunately the European Commission has taken on board some of the exclusions specified by the European Parliament, for example in the field of health. However, the scope of the Directive is still too broad, and leaves too much uncertainty about what is and is not included.

I also called for an end to the culture of secrecy surrounding the Council of Ministers meetings after a report by David Hammerstein Mintz MEP highlighted the issue. The secrecy surrounding the European Council‚s business is all the more worrying since the Council is the body which represents national governments when ratifying EU law. I am calling for an end to this lack of transparency. Many people regard the EU as a self serving old boys club, and this image of secrecy and elitism will not change until the EU radically overhauls the manner in which it conducts its business. In the meantime, the European Union will continue to be seen as an elitist preserve that excludes ordinary people from the debate about the direction of the EU.

Two airports in the Six Counties have come under scrutiny from Amnesty International, who said it has evidence that planes which have been used to take prisoners to illegal imprisonment and torture centres in third countries landed and refuelled at both City of Derry and Belfast International Airports. The European Parliament has established a committee to look into these allegations across the EU.

Bairbre de Brún calls for All Ireland response to bird flu threat after the disease is confirmed in the East of Scotland. "An all Ireland and cross departmental working group is needed to implement a working strategy to combat bird flu across the island of Ireland and to ensure that the public has clear and precise information', she said.

EU Foreign Affairs chief Javier Solano told MEPs that he did not regard Hamas as "an appropriate speaking partner" but also stated that he did not want the Palestinian Government to fail.