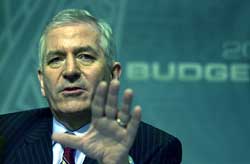 The debate in the EU Parliament on the Services Directive was one of the hardest-fought in recent years, with hundreds of MEPs engaging with thousands of amendments which will have a big impact on the services we can enjoy in the future.

The European Anti-Poverty Network was one of many organisations pleased that the parliament voted to exclude social services from the scope of the Directive. Subjecting care services and homeless shelters to the same competition rules as mobile phones and hairdressing is as dangerous as it is bizarre. There are good reasons why all countries have built up controls and regulations on social services to ensure quality and access for those who cannot afford to 'go private'.

We were shocked to see, therefore, that Commissioner Charlie McCreevy's re-write of the Directive overturns the key Parliament vote to exclude all social services and replaces it with a more restrictive wording which had been rejected by the parliament. This is an insult to the Irish MEPs who voted for this change, including the Fianna Fáil group.

We have called on the Government to follow the lead of the Irish MEPs and push to restore the exclusion of all social services in the Council of Ministers .