1916 - 2006: Sinn Féin President on legacy and relevance of the Easter Rising 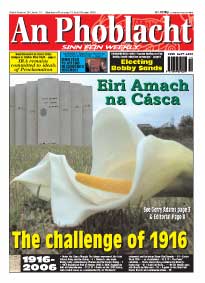 Completing the unfinished business of 1916

The most important thing to state about the 1916 Proclamation of the Irish Republic in 2006 is that it is unfinished business. We don't have a United Ireland - yet. We don't have a society where all the children of the nation are cherished equally - yet. But we in Sinn Féin believe that we can achieve those aims and create a better society for everyone on this small island - Catholic, Protestant and Dissenter, people of all religions and none, Irish citizens and new communities in our country alike.

Sinn Féin has paid tribute to the men and women of 1916 every year for the past 90 years, often at times when governments in Leinster House chose to ignore them. At other times governments paid lip service to 1916 while putting in jails and internment camps many of those who took the Proclamation seriously. So Easter is a time of irony and contrasts, as well as a time of celebration and remembrance. Everyone knows that the revival of the state commemoration of 1916 is all to do with the growth of Sinn Féin. That is all to the good. We have called many times for Easter 1916 to be commemorated appropriately by the Irish government.

It is entirely positive that the Irish Government's revival of its Easter military parade and President Mary McAleese's speech in February have provoked much debate about 1916 and its legacy. There have been TV, radio and newspaper features, exhibitions and public debates. New books have been published; others have been republished. People are being educated anew on the events of that momentous year, on the men and women who made the Easter Rising possible and on the movements and ideas which led to the Proclamation. It is an opportunity for young people especially to look at the ideas of Pearse and Connolly, the pivotal role of women and the commitment of the 1916 freedom fighters to the Irish language.

In assessing the relevance of the ideas and actions of 1916 to our own time, we need to look at the different strands which made up the Rising and their principles as reflected in the Proclamation. Irish Republicanism began with the United Irish movement of the 1790s when Wolfe Tone set out his aim to break the connection with England, "to abolish the memory of past dissensions, and to substitute the common name of Irishman in place of the denominations of Protestant, Catholic and Dissenter". Through Young Ireland to the Fenians, the ideas of Irish republicanism evolved. They are distilled in the wrtings of Pádraig Pearse, especially The Sovereign People, the message of which is summed up in the line from the Proclamation which asserts "the right of the people of Ireland to the ownership of Ireland". Who owns Ireland today? The British government still has jurisdiction over the North East of our country. There can be no final settlement, no real reconciliation and, most certainly, no fulfilment of the Proclamation so long as British jurisdiction remains. Irish unity and the establishment of the Irish Republic as, in the words of the Proclamation, "a Sovereign Independent State" remains our core objective.

Others also contest the ownership of Ireland. North and South, governments pursue a privatisation agenda which puts more of our resources and of our infrastructure in the hands of profiteers. The sell-out of our oil and gas to multinationals, the sale of the national airline Aer Lingus and the privatisation of health services run contrary to the Proclamation's declaration of the right of the Irish people to "the unfettered control of Irish destinies".

James Connolly brought to the Easter Rising the militancy of radical trade unionism and the ideas of socialism. The year before the Rising he stated: "In the long run the freedom of a nation is measured by the freedom of its lowest class; every upward step of that class to the possibility of possessing higher things raises the standard of the nation in the scale of civilisation." The Proclamation guaranteed "religious and civil liberty, equal rights and equal opportunities and declares its resolve to pursue the prosperity of the whole nation and of all its parts, cherishing all the children of the nation equally". These are the most often quoted words of the Proclamation, yet the Ireland of 2006 falls far short of their guarantee. Inequality abounds amidst previously undreamt-of prosperity. At least one in seven of our children live in poverty, denied the improved educational and employment prospects that all parents want for the next generation.

"A free Ireland with no sex distinction should be the motto of all nationalist women", said Constance Markievicz who fought in Easter Week. The Proclamation was advanced and progressive for its time as it advocated universal suffrage and addressed men and women equally. Women played a key role in the Rising and in all phases of the struggle for Irish independence. Yet Irish women remain significantly under-represented in Irish political life today - including in our own party. We simply cannot attain our objectives if we do not bring far more women into our party and into elected positions.

One key line in the Proclamation refers to "the differences carefully fostered by an alien government, which have divided a minority from the majority in the past". This refers to the British government's policy of divide and conquer which kept Irish people separated by using sectarianism to maintain its rule in Ireland. Like the men and women of 1916 Sinn Féin today rejects all forms of sectarianism and bigotry. We are committed to a process of national reconciliation and have entered a long-term dialogue with representatives of unionism in our country.

The 90th anniversary of the Rising is a time to celebrate and commemorate. It is also a time of challenges as we move the republican project forward in the Ireland of 2006. So let us all make the Proclamation more than a framed document on the wall. Let us work towards the day when we will live in the type of Republic it promises, an Irish Republic worthy of the name.

Martin McGuinness and Gerry Adams at the launch of a campaign to promote the wearing of the Easter Lily this year, the 90th anniversary of the 1916 Rising