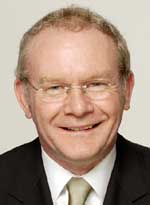 Sinn Féin' s Martin McGuinness has described Irish government proposals for an anti-sectarianism pledge as ''a good start'‚ He said " If sectarianism is to be eradicated, we need to see an end not just to blatant sectarianism on our streets but the implementation of policies to address deep-rooted sectarianism and discrimination in employment and job creation, to end bigotry on some unionist dominated councils, to end all sectarian attacks wherever they occur and to completely end the activities of unionist paramilitaries. The key to all of this is political leadership."

What was needed was an open and honest debate about the nature, causes and extent of sectarianism, McGuinness said, adding that it was more pervasive than the scenes witnessed at Holycross school, the abuse of parishioners at Harryville Church and Carnmoney cemetery and attacks on homes across the Six Counties in the Fountain and in North Antrim. Deep rooted sectarianism is evident across society, including within government agencies.

"In order to end sectarianism there must be:

The key to all of this of course is political leadership from all parties including the DUP. Republicans have shown by example the need for engagement across society. The Good Friday Agreement commits all of us in political leadership to promote good relations at every level of our work and this of course places a particular onus on those working at local government.

McGuinnes said it was time that the DUP stopped sending mixed signals. "They need to stop their messing about and engage in the political and peace process", he said.

Commenting on proposals for the return of the Forum for Peace and Reconciliation, McGuinness said that, while forums for those bereaved as a result of conflict to have their voices heard, is to be welcomed, it cannot replace demands for truth and justice of the Finucane family, those killed in the Dublin Monaghan bombings or others. "Nor will it provide a substitute for the sort of victim centred independent truth recovery process which we believe is vital", he added.