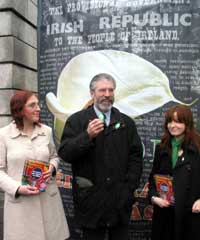 Sinn Féin President Gerry Adams was in Dublin on Wednesday last to launch the annual Easter Lily campaign. The event took place on International Women's Day to honour the women of Cumann na mBan who first introduced the Easter Lily and to celebrate the activism of women involved in political activity in communities across Ireland.

Adams used the occasion as a platform to call on women to join Sinn Féin in greater numbers and to work with the party to deliver justice and equality on a local, regional and national level, as well as advancing the cause of Irish reunification.

"2006 marks the 90th anniversary of the 1916 Rising. I want to call on people throughout Ireland to make a special effort this year to wear an Easter Lily and honour Ireland's patriot dead. This year on International Womens Day we are honouring the women of Cumann na mBan who first introduced the Easter Lily. Here in St. Stephens Green Constance Markievicz and Kathleen Lynn played a leading role in the Rising and throughout this year we will be continuing the work that they began for equality and Irish unity.

"Today we are also celebrating the activism of women who are involved in political activity in communities across Ireland, including those women who are to the forefront of community development, women involved with voluntary organisations, women campaigning on socio economic and equality issues in their own communities, nationally and internationally.

"In Ireland, women are still not fully represented in either national politics or in local government decision-making structures. Men continue to dominate all our cultural, social, economic, legal and political institutions.

"Sinn Féin believes that gender discrimination and equality for women are issues of concern for us all."