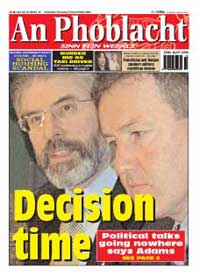 This involves both governments meeting the parties and setting out a timetable by which suspension will be lifted and an Executive formed in the Six Counties. He said this should be completed before the summer and well in advance of the loyalist marching season. If the DUP rejects this, Adams said the two governments should, on the basis of joint government decision making, get on with delivering the many parts of the Good Friday Agreement that they have direct responsibility for.

"The stated objective of the current talks is to get the political institutions up and running as quickly as possible and involving all of the parties. This is the position of the Irish and British governments, Sinn Féin and all of the other parties, with the exception of the DUP. The challenge is how to achieve this and what should happen if this objective cannot be realised.

"In my view the governments accept that the current talks are going nowhere. The cancellation of Mr. Blair's recently scheduled speech and the postponement of tomorrow's talks at Stormont is evidence of that", said Adams.

"Tomorrow's summit at Downing Street could be an opportunity to rectify this. But shadow boxing with the DUP, marking time, maintaining an Assembly that is prevented from functioning, seeking to exclude Sinn Féin from talks- or entertaining the establishment of political institutions which fall far short of the Good Friday Agreement, is not the way forward", he said.

"The DUP have been the lead party in unionism for more than two years. They have had plenty of time to make up their mind about whether or not they are going to embrace the new dispensation. The longer the political vacuum continues, the more difficult it will be to get the political institutions back up and running. The governments need to face up to this reality. They need to commit themselves to making progress well in advance of the marching season.

"I have written to both the Taoiseach and the British Prime Minister outlining an approach which Sinn Féin believes will advance the political and peace process and determine whether the DUP is up for joining a power sharing government with all of the other parties", he said.

"This involves the two governments meeting the parties and setting out a timetable to lift suspension and form an Executive. This should be completed before the summer and well in advance of the Orange marching season.

"If the DUP rejects this then the governments, on the basis of joint government decision making, should get on with implementing those many parts of the Good Friday Agreement for which they have direct responsibility. This would include action to give effect to the provisions of the Good Friday Agreement on Equality and Human Rights, Irish Language, Victims, Symbols and Emblems along with an expansion of the all-Ireland elements of the Agreement, including the areas of co-operation and the number of implementation bodies.

"The governments have a responsibility to ensure that the process of change is moved ahead", said Adams.