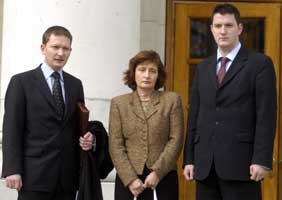 Almost three years after the Stevens' Inquiry identified 20 cases of alleged crown forces' collusion with unionist paramilitary death squads and set the evidence before the Public Prosecutions Service, no decision has been made regarding possible prosecutions.

In April 2003, head of the collusion inquiry, John Stevens asked the PPS to decide whether 20 members of the British Crown forces should face criminal charges relating to allegations of collusion in a series of UDA murders.

The PPS said it would give "careful and expeditious consideration" to the evidence presented by the Stevens' inquiry team but last week a spokesperson for the PPS admitted no decision had been taken on any of the cases.

In his report, which has yet to be published in full, Stevens confirmed crown forces' collusion and cover up. "I have uncovered enough evidence to lead me to believe that the murders of Pat Finucane and Adam Lambert could have been prevented," said Stevens.

"I also believe that the RUC investigation of Pat Finucane's murder should have resulted in the early arrest and detection of his killers," said Stevens.

Sinn Féin MLA Gerry Kelly said nationalists would be concerned that members of the British forces allegedly involved in collusion had not been brought before the courts.

Meanwhile the Finucane family have described their meeting with DUP leader Ian Paisley as "cordial" and "open". The meeting, which took place at Stormont, was held just a day after the 17th anniversary of the death of the Belfast defence lawyer. His widow, Geraldine Finucane and sons John and Michael were accompanied by solicitor Peter Madden and Jane Winter of British Irish Rights Watch.

The meeting was kept confidential at the DUP's request but the family said Ian Paisley had made it clear that he was there to listen to what they had to say. "We discovered by the end of the meeting that we had a lot in common," said Geraldine Finucane.

"We hope the DUP now have a better understanding of the family's campaign and what is required for truth and justice to be delivered," said Geraldine.

"The DUP should now do the right thing and back calls for a full inquiry. It is clear that the Inquiries Act is simply a cynical measure to hide the truth," she said.

Publication of statistics complied by the Police Ombudsman's office suggest that when it comes to complaints against the PSNI there is a growing consensus between Protestants and Catholics.

According to the report since it was established in November 2000, the Ombudsman's Officer has received 14,000 complaints and amongst those questioned a total of 49% were Protestants and 38% Catholic. A sizable section 41% described themselves as having no political affiliation, while the largest number of those who identified their political preference were supporters of the DUP.