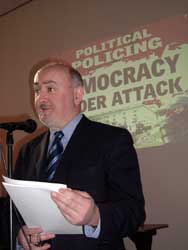 Building a party 'fit for purpose'

The message coming out of last Saturday's Annual General Meeting of Sinn Féin's Cuige na Sé Chondae was as clear as it was a simple one - much has been achieved but there is so much remaining to do.

That message reflected the positive nature of a day that witnessed intense discussion in workshops and added to the highly motivational contributions from the speakers. It was clear that the conference was not a mere, 'talking shop'.

Every delegate that An Phoblacht spoke to was impressed by the intensity of the political discussion throughout the day and were clear, that whatever the political achievements of the past year, the incoming year will be full of new challenges that we as activists will need to confront and deal with.

What became clear, in the course of the AGM which was held in the magnificent Sinn Féin Centre in Gulladuff, County Derry, was that we can only take our struggle forward if we are, 'fit for purpose'. Fit for purpose means that Sinn Féin cannot rest on it's laurels.

Certainly we can take heart and encouragement from the achievements of the past; we can measure our successes North and South in our growing electoral support; a support that has delivered five TDs in the 26 Counties and five MPs in the North.

And with 126 councillors in the North and a similar number in the South it is obvious that the republican message has cut through the 'iron curtain' of censorship and the political hostility of the political establishment.

The republican base is broadening and as one speaker to the conference pointed out: "It is clear that people want change and we need to be agents of change."

The need for Sinn Féin activists to be strategic in their thinking and for the party to be clear about it's vision means we must market our policies to attract new supporters.

However we will only be successful in our future development by building on the successes of the past. In other words the commitment, sacrifice and endeavour that republicans activists have contributed in the past will be the cornerstone of our work into the future.

So while many republicans have their own vision of what a new, united Ireland will be like, a vision based on the 1916 Proclamation and the Democratic Programme of the First Dáil, we need to bring that vision to the people show that our vision can work for them at a local level and is based on inclusivity.

To quote one Fermanagh delegate, "we need to build from the bottom and lead from the top, leadership is important and needs to be clear, decisive and based on our vision".

However, none of these ideas can take Sinn Féin where it wants to go if we do not have a structure and a party that can deliver the vision.

Taking that idea up delegates agreed that the party must put enormous effort into recruiting new members and bringing former activists back into the party.

While the conference measured Sinn Féin's political successes over the years in terms of electoral progress, delegates were quick to point out that electoral success isn't the same as political strength.

Reflecting that view Sinn Féin's Dáil leader and TD for Cavan/Monaghan Caoimhghín O'Caoláin in his keynote address, cautioned that: "We cannot rely solely on elected forums to bring about change.

"Real change, the type of national, economic, social and cultural change that we want will only come about through empowerment, through people the length and breadth of this country claiming their rights."

O Caoláin highlighted the anti-war campaign and the campaigns in support of the Rossport 5 and the Irish Ferries' workers as examples of "people power" and stressed that these campaigns sent shockwaves throughout the political and media establishments who would like to see people as "depoliticised and demotivated".

"In this the 90th anniversary of the Easter Rising we should remember that the Proclamation declares the right of the people of Ireland to the ownership of Ireland to be "sovereign and indefeasible". That means Ireland owned by it's people not by the British Government, Shell Oil, Tony O'Reilly or any golden circle of wealth and power."