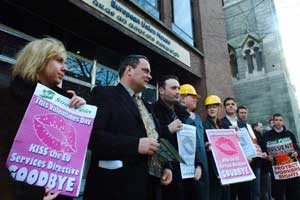 As An Phoblacht goes to press unprecedented lobbying is taking place in the European Parliament where MEPs will vote on the controversial Services Directive on Thursday morning.

The controversial directive, which would see public services opened up to profit-seeking private enterprise, has attracted an unmatched level of opposition from trade unions across Europe.

Since last week it seemed a compromise was on the cards with the the conservative European People's Party - EPP (to which Fine Gael is affiliated) and the centre-left Party of European Socialists (to which Labour is affiliated) signing up to agreed amendments.

The compromise removes explicit reference to the 'country of origin principle', which allowed companies apply employment legislation of the country they were registered in rather than the country in which they operated, leading to a race to the bottom in employment law.

Without a 'Country of Destination' principle, obliging the company to obey the laws in the state it operates, this leaves it open to the European Court of Justice to interpret the Directive to bring in the Country of Origin principle by the back-door. Something the Court, with a track record of supporting free market judgements, would be happy to do, explaining the Commission's support for the amendment.

This was presented as a victory for those opposed to the Directive by Labour MEP Proinsias De Rossa, a position rejected by Sinn Féin TD Aengus Ó Snodaigh.

Speaking at a Sinn Féin protest outside the EU Commission offices on Molesworth Street on Tuesday Ó Snodaigh said: "Fine Gael and Labour are eager to give the impression that their groups in the European Parliament reached a compromise eliminating the threat posed by the Directive. They are peddling a new myth.

"Labour is trying to convince people they have achieved a compromise that addresses all the concerns of those opposed to the Directive. This is simply not the case.

"Firstly, the proposed compromise amendments would still mean that the EU could prohibit an elected authority from determining the laws and regulations that it wishes to apply to all service providers operating within its jurisdiction.

"Secondly, European Parliamentary groups are not political parties with equivalent whips and there have already been indications from many MEPs in the two groups that they are unhappy with the compromise and will not vote to uphold it. A number of MEPs in Labour's group have indicated they will vote to reject the Directive, in line with Sinn Féin's group, United Left/Nordic Green Left.

"Furthermore, even if the European Parliament votes in favour of the compromise this is by no means the end of the threat. The Directive will pass to the Council of Ministers whose deliberations are secret and who are likely to propose a text much closer to the European Commissions original proposal."

While Sinn Féin activists took to the streets of Dublin, Báirbre De Brún MEP joined 50,000 workers on the streets of Strasbourg where unions from 20 of the 25 member states had mobilised in opposition to the Directive.

The head of SIPTU's delegation, Paul Bell of the Dublin Health Services Branch, told An Phoblacht the demonstration's success was a powerful signal of the strength of European workers.

While acknowledging that the compromise, supported by SIPTU, was coming under increasing pressure, Bell remained confident it would be passed.

Speaking after the demonstration Báirbre de Brún urged the Parliament to reject the Directive outright saying: "The recent Irish Ferries dispute illustrated the future for workers under the Services Directive.

"The Directive commercialises almost all services within the EU. It will deprive millions of quality public services. It disproportionately affects women both as the majority of workers in the service sector and as users of those services.

"It will pit worker against fellow worker and ensure a 'race to the bottom' with regard to pay and conditions.

"We put governments on notice - the struggle for a Europe of Equals will be at its most intense at national level."

With the votes scheduled for Thursday morning every effort is being made to put a deal together. With the centre-left having in effect caved in on the country of origin principle the argument has hinged around what sections of the economy a member state will still be permitted to regulate.

Reports from Strasbourg on Wednesday morning indicate that the right may have conceded health and social security as areas where countries can regulate foreign services. Indications are however that in return, the Socialist group has conceded on social policy and consumer protection.

These deals and compromises will be the subject of over 400 amendments taken in the European Parliament and it is still anybody's guess as to what will happen.

Sinn Féin's group is maintaining a steadfast opposition, arguing for the Directive's outright rejection. There are signs centre left French and German MEPs will support this position, angered at the breadth of concessions to the Conservatives.