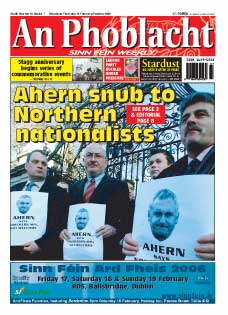 Oireachtas representation: Taoiseach does a u-turn

Sinn Féin Dáil leader, Caoimhghín Ó Caoláin TD has described as "absolutely reprehensible" the Taoiseach's decision, announced in the Dáil on Wednesday, that he would not be progressing the issue of Northern representation in the Dáil as he had previously proposed.

The news that Bertie Ahern had u-turned on such an important and long awaited proposals was greeted with dismay and anger by nationalists, particularly in the North but also throughout the 32 Counties.

In the Dáil on Wednesday, when asked by Labour Party leader Pat Rabbitte what the status was regarding proposals for representation from the North in the Oireachtas and whether they had been shelved, Ahern replied that: "I have listened to what everybody said and taken account of the views of all the parties, several of which have reservations about the proposal. I am currently considering those responses and will return with a different proposal. It is obvious the House will not agree to anything other than Northern parties attending committees to make presentations and discuss issues in the normal way.

During further exchanges in the Dáil, Ó Caoláin said the remarks were alarming. "I am deeply alarmed by the Taoiseach's response to the question regarding his proposal to establish a committee of the whole Dáil to accommodate the participation of Northern MPs in specific debates with elected colleagues on this part of the island to address issues of common concern," he said.

"This is the first indication of the Taoiseach's intent not to proceed with this proposition. As somebody who had welcomed his endeavour to meet the recommendations of the All-Party Oireachtas Committee on the Constitution in that regard I am, to say the least, disquieted that he is now considering not an alternative but something which is much less than the thrust of the committee's recommendation, namely an accommodation involving existing committees outside the Dáil chamber which amounts to the same access that any lobby or interest group can avail of.

"That falls far short of the reasonable expectation that has been created within swathes of opinion North of the border, not confined to nationalism and republicanism but among many of another tradition and background who also viewed the proposition positively.

"It is absolutely reprehensible that the Taoiseach appears to have caved in to the partitionist demands of Fine Gael and Labour, who despite being signatories to the original All-Party recommendations, have decided, now the proposition could become a reality, to actively work against it. This is an appalling capitulation by the Taoiseach and raises serious questions about his integrity on this very important issue."

In response Ahern said: "I hope my amended proposal will still be in line with the report of the All-Party Oireachtas Committee on the Constitution which was endorsed by this House in May 2003, and will be consistent with the Good Friday Agreement. Deputy Ó Caoláin will accept that I must secure a consensus on the matter. I am trying to frame a proposal that sticks with those principles and I am not abandoning it, but I must take account of the views of the parties. It has been rightly suggested to me that I implement the recommendations of the All-Party Oireachtas Committee on the Constitution report and that is what I am trying to do.