Ard Fheis to be the largest yet 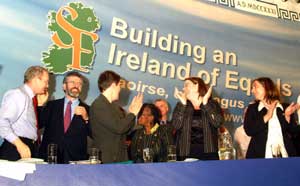 In the 25 years since the Hunger Strikes, the anniversary of which will be a huge feature at this year's Ard Fheis, Sinn Féin has made massive strides forward as a party. Its growth can be seen not just in its ever-expanding membership or electoral success, but also in the range of areas where it is now recognised as the leading party of the left. This achievement will be reflected in the party's annual conference on the 17, 18 and 19 February in the RDS in Dublin.

Over 480 motions will be debated by delegates from across the country in Sinn Féin's biggest ever Ard Fheis.

The intensive conference will put to rest once and for all attempts by Sinn Féin's opponents to label it as a single-issue party.

Health, housing, the economy, culture, the all-Ireland agenda, the environment and workers' rights will be just some of the topics receiving attention over the three days.

In our annual preview of the Ard Fheis Clár, An Phoblacht points out, this week and next, the key debates to look forward to.

Following an opening address from the Sinn Féin leadership, the weekend will kick off with discussion on equality and human rights.

The sensitive issue of the party's policy stance on abortion will be just one of the debates in this section. Motions range from the 'right to choose' to the 'equal right to life' and the diversity of views should make for an interesting argument. Delegates will also look at the growing problems of the sex industry, human trafficking, violence against women and anti-racism.

Between 7-8pm, the Peace Process will be discussed in detail.

Sinn Féin is the party most committed to the Good Friday Agreement, and this has been obvious in the last year, with republicans fulfilling all of their commitments. As usual, an update on the process and negotiations will be given to delegates at the start of this section.

Truth and reconciliation will probably feature prominently in this year's debate. Ard Chomhairle motions set out clearly Sinn Féin's commitment to the Good Friday Agreement's requirement that "it is essential to acknowledge and address the suffering of the victims and survivors of violence as necessary elements of reconciliation", and call for Britain to acknowledge its role as the primary protagonist in the conflict. There are also motions calling for an end to discrimination against victims of British state collusion and in support of An Fhirinne's campaign for truth and justice.

This section reflects the democratic and vibrant nature of the party, with motions calling for a new debate around the future of the Peace Process.

Demilitarisation, outreach and parades are also discussed in this section.

Friday night ends with a discussion on the EU and International Affairs. Two EU policy documents will be presented to the delegates for acceptance. There is also a detailed motion on the Services Directive, which Sinn Féin has being leading the campaign against in Ireland. If introduced by the EU, the party fears it will encourage a 'race to the bottom', with companies using it to undermine workers' rights.

Next week: An Phoblacht previews the main debates on Saturday and Sunday.