Will Indo defend us against anti-Irish racism? 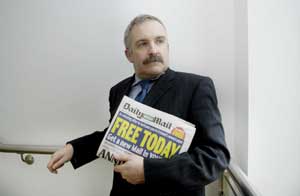 Far be it from me to take sides, a plague on both houses being the appropriate reaction, but I couldn't help appreciate Executive Editor Paul Drury's interview with Christopher McKevitt on RTÉ's Morning Ireland.

McKevitt challenged Drury over the Mail's long history of bitter anti-Irish racism, quoting, of all things, Independent Newspapers' claim that it represented the opposition to the Mail and its attitudes. Drury who, by the way is a committed Irish-speaker, calmly pointed out that he wouldn't take such lectures from a paper which in 1916 had called for the execution of James Connolly and which had opposed Irish nationalism ever since.

McKevitt, who obviously thought that the anti-national Independent was worth quoting, was left speechless.

The media have been much exercised by freedom of speech in the last week, and have roundly condemned Islamic protests against the notorious Danish cartoon which depicted Mohammed as a bomb-wearing, violent fanatic. At the bottom of the scale — the English tabloids masquerading here as Irish papers, the Sunday Indo and so on — the coverage has been strident and loudly deploring Muslim excesses.

Higher up, speaking like the Irish Times to a more "refined" and liberal audience, the line has been to dismiss the cartoon as an exercise in bad taste, but to pontificate that freedom of speech requires us to tolerate bad taste. The French philosopher Voltaire has been frequently quoted: "I disagree with what you are saying, but I will fight to the death for your right to say it."

What both the tabloid scum and high minded liberals are ignoring of course is that the cartoon was deliberately designed to offend and provoke. Why then should anyone be either surprised or critical of the fact that it did indeed offend and provoke?

Irish people, of course, know all this only too well. During the 19th Century the notorious English magazine Punch regularly published anti-Irish cartoons which depicted the Irish as apes, ignorant and brutish. That wasn't an issue of freedom of speech, but of naked racism; and the same is true of the anti-Islamic cartoon published in Denmark.

For it hasn't been lost on Muslims throughout the world that if an anti-Judaic or anti-Semitic cartoon of a similar kind had been published there would have been an outcry, and loudest in their condemnations would have been the Danish Government, the liberals and even the tabloids.

Why should Muslims have to put up with hateful insults? After all it is a crime to incite racism or religious sectarianism. Are Muslims not entitled to that respect as well?

The Irish Times this week liberally quoted the IMC report in condemning republican criminality (sic). But the challenge to law and order posed by the far more extensive activities of the UDA and UVF in loyalist areas was largely ignored. Loyalist gunmen have been blamed for 94% of recent murders and shootings.

But who has been to the fore in attacking republicans and giving widespread coverage to every accusation of criminality, with no supporting evidence, but the Irish Times itself.

And who has largely ignored the challenge to law and order posed by loyalist gunmen and their extensive campaign of murders and shootings but the Irish Times. It would be nice if the leopard were truly changing its spots, but the reality is that the Southern establishment, of which The Irish Times is a key mouthpiece, are uninterested in the loyalist threat against northern nationalists. They are instead obsessed by the threat which a resurgent republicanism poses to the established order of privilege and wealth in Europe's 26-County province.

And the lesson of all this? Don't trust honeyed words from the mouths of reactionaries. Read behind the lines and remember that, as the late Todd Andrews said, freedom of the press is the freedom to write what the owners of the press will let you write. And who owns the press here?