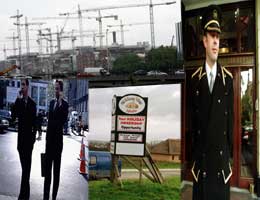 In a state where the top 20% enjoy an income five times that of the bottom 20%, it was revealed this week in newly-published tax reviews that successive Fianna Fáil and Progressive Democrat Coalition Governments rewarded those elite high income earners with a €3 billion tax give away.

This siphoning of funds out of public coffers was allowed to continue despite governments having full knowledge that low income earners in the 26 Counties were in dire need of increased government spending to tackle chronic health problems, inadequate housing and an under-funded education service where 5,000 children leave school early annually, where 10% of primary school children have literacy problems and 23% of children are at risk of poverty.

Finance Minister Brian Cowen published his second Finance Bill last week, the ninth of this government. The bill, with a few piecemeal gestures on tax evasion and avoidance, such as the forcing of banks and other credit institutions to disclose customer account details to the Revenue Commissioners, seemed like the usual Fianna Fáil tactics of using a smokescreen to cover up the business as usual sign.

This week as Cowen finally published three separate reviews of the 26-County tax relief and allowances system it became clear that he and his officials had written this bill knowing of a damning indictment of past government policy, but did nothing.

Two of the reviews were conducted separately by economic consultants, Indecon and Goodbody while the third was an internal Finance Department review.

The urban renewal scheme which up until the end of 2004 had cost the exchequer €436 million in lost tax revenue will actually finish with a €1.4 billion tax give away.

According to Goodbody consultants, "social and community benefits from the scheme were limited", and that the scheme has "not contributed to the supply of social housing". Goodbody found that, "in many of the larger urban areas, a negative impact of tax driven development has been the emergence of a large transient or social welfare dependent population". They also concluded that, "the tax benefits of the scheme have accrued to relatively few high income individuals".

The benefits of tax relief flowing to the elite few were also found in the Indecon Report, where they said that the refurbishment of rented residential properties had been used primarily by high income earners.

So once again we have the same story of tax reliefs being availed of by a small elite. It leaves three unanswered questions; when did the government first realise how the reliefs were being abused?; knowing what was in the reports why didn't Cowen using his second finance bill to begin a real process of tax reform?; and why were the banking and finance community not helping their ordinary customers avail of these reliefs?

We don't know when the government first knew that the reliefs were being used by this tiny minority of the super rich who pay no tax, though it was clear from Revenue Commissioner reports over five years ago that the top 400 earners were paying no income tax. It seems that for now Cowen and his predecessor McCreevy are pleading ignorance of the facts.

What can't be overlooked is the sham that last week's Finance Bill has become. Take just one example -- Cowen's proposals on allowing SSIA money be invested in pensions with an extra tax relief. Over 50% of Irish workers have no pension cover. What has Cowen done to deal with this poverty time bomb? -- nothing.

Yet in the Indecon and Goodbody reports we read of two individuals using the tax reliefs who were able to draw down a lump sum pension of €25 million each when they retired. At the same time as 50% of workers have no pension cover, the amount of money in Approved Retirement Funds jumped from €19 million in 2000 to €1.1 billion today. Did the government not think it was strange that one part of the workforce has no pensions while another is retiring on millions all tax free?

What about the conclusion in the Indecon report that tax incentives increased site prices and construction costs. This is just one aspect of a parallel massive increase in house prices during the time period that property schemes were being run. Did it ever occur to the government that high house prices and the accompanying mortgages were the reason for workers not having the money to invest in pensions?

It seems that we have been robbed not once but twice by these incentive schemes. Finally how come the Irish banking and finance sector didn't start offering property investment schemes to their customers?

It was clear from the SSIAs that there were hundreds of thousands of people looking for a good investment to save money, yet few banks or other financial institutions seemed ready to create products that encouraged investment in the tax allowances schemes. One conclusion is that we have been badly served not just by government but by the banking community also.

Tax relief what it has cost you so far: