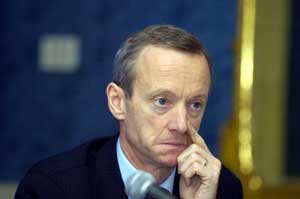 The launch of the invasion by the Daily Mail of the Irish media market brought out the true West Brit in their main target's chiefs over at the Irish Independent.

Indo Chief Executive Vincent Crowley brushed off the Daily Mail threat, telling RTÉ Radio's News at One on Monday that there is no gap in the Irish market for the likes of their true Brit rival.

"The Irish reader," the Indo man opined, "is quite different to the reader [the Daily Mail] are used to on the mainland".

At home with Sir Tony

The owner of the Indo, the millionaire playboy 'Sir' Anthony O'Reilly, is a knight of the British realm who bends his knee to the British queen. No wonder his chief executive is at home on "the mainland".

The non-Independent Monitoring Commission says that it knows the IRA has held back weapons but it doesn't know who is on the IRA Army Council.

"There has been some press comment about possible changes in the membership of the Provisional Army Council but these remain unconfirmed," the IMC said in its report last week. Which is all a bit surprising. Everyone from Michael McDowell to the DUP say they know who is. But are the IMC saying that their chums in MI5 and Special Branch don't?

Political leaders have been making the headlines in the past few days with their 'colourful' language.

Fianna Fáil Seanad leader Mary O'Rourke repeated her controversial "working like blacks" remark (but this time intentionally and mischievously about herself) on Newstalk 106 radio's The Wide Angle at the weekend.

Just 48 hours earlier, British National Party leader Nick Griffin and one of his henchmen were sent for retrial on two charges of inciting hatred but acquitted on two other charges. A cause for celebration in the BNP bierkeller? Maybe not.

Nasty Nick's acquittal must cause some heart searching among the BNP's brains scratching their boneheads back in the führer-bunker. After all, if they're legally not racist, then what's the point of being in the BNP at all? They might as well be in the Conservative Party... or Pat Rabbitte's Labour Party.

It's the way he tells 'em

Meanwhile, over in Leinster House, Pat Rabbitte's political Big Brother, Enda Kenny, was getting his blue shirt and knickers in a twist after Mary O'Rourke's nephew, Children's Minister Brian Lenihan, accused Fine Gael of being racist when they complained about the Early Childcare Allowance being given to EU nationals employed here.

But, hold on. Who was it who told a chortling audience of Fine Gaelers three years ago a 'joke' in which he described the first Prime Minister of Congo and black freedom fighter, Patrice Lumumba, as "a nigger"?

It must be the way you tell 'em, Enda.

Good news for the British Army's Parachute Regiment — they've now been officially given a licence to kill.

The regiment infamous for the massacre of unarmed civil rights marchers in Derry on Bloody Sunday have been assured of their commanders' "full support" over any incident in Afghanistan in the unlikely event that they face prosecution in the courts for slotting some Afghan Johnny up the Khyber Pass.

The Paras' motto is "Ready for Anything." Let's hope the long-suffering Afghans are.