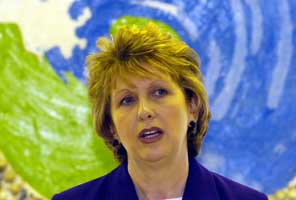 McAleese and 1916 - Controversy and contradictions

At the end of her address on the 1916 Rising President Mary McAleese said: "Enjoy the conference and the rows it will surely rise." Rows were risen about the speech by the usual suspects — the hysterical anti-nationalist elements whose loudest voice is Kevin Myers of the Irish Times. The absurd Lord Laird and David Adams also weighed in. The attack on McAleese by Ian Paisley has added fuel to the controversy which rumbles on in the letters pages.

It would be a mistake for republicans to read too much significance into the speech, despite the current din. As one letter writer pointed out, in defending McAleese against her critics, her predecessor Mary Robinson made similar remarks when she unveiled the statue of James Connolly in Dublin city centre. The reaction from the anti-republican elements is coming from a quarter that is much less politically significant than it was when Eoghan Harris was witch-finder general in RTÉ and when the Dublin Government ignored the 75th anniversary of the Rising.

In most countries a speech by the head of state praising those who fought for independence would be so unremarkable as to be largely ignored. But the reason for the row is that Ireland is not independent. That also points up a contradiction in the speech. Mary McAleese spoke of "this strong independent and high-achieving Ireland". The question of Irish independence has not been resolved and many people do not concur with her argument that the Good Friday Agreement "ends forever one of the Rising's most difficult legacies, the question of how the people of this island look at partition. The constitutional position of Northern Ireland within the United Kingdom is accepted overwhelmingly by the electorate North and South."

The reality is that people voted for the Good Friday Agreement for a wide variety of reasons. The union still exists and is still strongly opposed. Unionism remains entrenched but politically weaker than it has ever been. Republicans retain their conviction that the union and Partition are undemocratic. The one key factor that united people in support of the Agreement was not the constitutional question; it was the belief that the Agreement offered a peaceful way forward, a road beyond conflict.

The 1916 Rising would never have occurred if Home Rule had not been whittled down to the weakest form of devolution and then snatched away from the Irish people by an armed alliance of English Tories and Ulster Unionists who routed the Liberal Government and the Irish Parliamentary Party. There are echoes of that today in the efforts of British securocrats and rejectionist unionists to scrap the Good Friday Agreement.

Mary McAleese was correct to highlight the positive, progressive legacy of the freedom fighters of 1916. The political challenge, 90 years on, is not for her but for the Fianna Fáil and PD Ministers who got their seals of office in Áras an Uachtaráin. Do they fear Sinn Féin Ministers in a restored Executive boosting the electoral fortunes of Sinn Fein in the 26-County General Election? Are they determined to restore the Good Friday Agreement or will they be content to be seen to 'make the effort', while blaming the DUP and Sinn Féin in equal measure for failure to reach agreement? And in the event of rejectionist obstruction succeeding again what are they going to do to advance the national interest they claim to uphold?