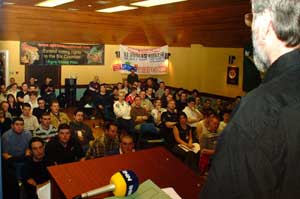 Last Monday saw the resumption of talks between the North's political parties and the Irish and British Governments in Hillsborough.

A week of British Government, IMC and unionist theatrics predictably preceded the meeting wit the DUP hiding behind the fig leaf of last minute excuses to refuse to talk to Sinn Féin, this time in the form of the IMC's latest rubbish report.

Paisley used his party's conference over the weekend to accuse the IRA of lies. The IMC's non-independent, biased work of fiction was taken verbatim. The angry protestations from the internationally respected General John de Chastelain and the IICD, that all IRA arms were put beyond use, were ignored.

Speaking at the Ógra Shinn Féin conference over the weekend, Gerry Adams called for the DUP to take a sensible approach to the talks.

"The talks cannot be only for the optics," he told the youth delegates. "The DUP have to be given the chance to put their ideas to the rest of us and Sinn Féin will listen attentively and respectfully to everyone's ideas.

"But the main objective of these talks has to be to end the suspension of the political institutions within a short time-frame."

Speaking on the eve of the talks, Sinn Féin Chief Negotiator Martin McGuinness echoed this demand.

"It is undeniable that the situation today is entirely transformed from what it was ten or 20 years ago," he said.

"Following the IRA initiatives of last year the potential for further significant political progress and stability has never been better. The republican contribution to all of this has been substantial and is irrefutable. Republicans have been, along with others, the peace makers."

McGuinness pointed out that there were, however, people intent on wrecking the peace.

"They are to be found in the unionist political parties who hanker after the old days of unionist domination," he said. "They are in the Special Branch and British security system. They are the people who provide the unsubstantiated allegations, including DUP supporters in the Special Branch, that make up the nonsense which is presented as an IMC report.

"The two governments need to deal with the absurdity of this situation."

McGuinness said the next few months will be the most challenging and crucial since the Good Friday Agreement was signed.

"In my view most people are fed up with the endless, repetitive circular arguments that pass for politics. Each day brings more news of job losses, cutbacks, reviews in public spending, changes to our health, education and other services, and all being done by unaccountable British Ministers. This is an untenable situation. It obviously does not serve the interests of nationalists and unionists."

He added that the talks must change all of this.

Speaking after the initiation of talks, Gerry Adams said the governments must set out a public time-frame for the restoration of the institutions, before the loyalist marching season begins in April.

"People need to have some sense that local, accountable representatives are administering their affairs," he said.

He said there was a question about whether the two governments were in charge, or whether Ian Paisley was.