Thousands remember and demand the truth 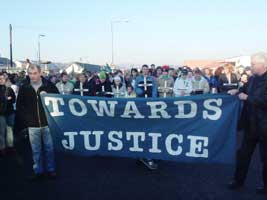 With the Saville Inquiry due to announce its findings later this year, more than ever before this year's Bloody Sunday commemoration march felt like the collective holding of breath of a community which has so longed for, and fought so hard for, justice for those of its members who were gunned down on their streets by the British Army's Parachute Regiment 34 years ago.

On the one hand, there is a tentative daring to believe that the truth about Bloody Sunday — already known to the families of the dead and the people of Derry — might now be acknowledged by the British state and that justice will, finally, be within grasp; but on the other, a fear that, it may still, at the very last, be snatched away once again by an establishment which has consistently violated the rights and violently suppressed the aspirations of the nationalist community in the Six Counties.

Sinn Féin leaders Gerry Adams and Martin McGuinness joined the thousands of people who, led by the families of the dead, wound their way down from the brilliant sunshine of the Creggan into the gathering mist of Free Derry Corner. There the rally was addressed by Kay Duddy, whose brother Jackie Duddy was killed on Bloody Sunday, Sinn Féin Foyle MLA Raymond McCartney, Mark Thompson of Relatives for Justice and Derry SDLP Councillor Colm Eastwood.

Kay Duddy spoke of the Bloody Sunday families' hopes and fears for the outcome of the Saville Inquiry, saying that 2006 had the potential to be a watershed year for their campaign and for others who have lost loved ones at the hands of the British state. "It has the potential to send a wave of hope or a sea of despair to all the other victims of state violence on this island," she said. "Bloody Sunday has long been seen as a litmus test for the British Government in Ireland, and as a beacon of hope for many other families and campaigns which have not had the opportunities nor witnessed the progress we have achieve.

"We are conscious that there are many families throughout Ireland who are looking to the Saville Report to get a sense of whether the British state is now prepared to face up to the consequences of their actions in Ireland. The true challenge of 2006 will be whether the British state can come to terms with the conclusions which I am confident the Saville Inquiry will deliver".

She set out what the families require from Lord Saville's report. "Firstly, that it will state clearly that British soldiers committed murder on the streets of Derry on Bloody Sunday. Secondly, that there was never any justification for the British Army's actions carried out on the day. Thirdly, that the circumstances and atmosphere created within the Parachute Regiment immediately prior to their deployment in Derry were a direct contributor to their murderous actions. Fourthly, that culpability for events on the day lies with the British Government's Ministers and British Army officers who made a decision to murder the civil rights movement on the streets of Derry, and that the British state must finally take full legal and political responsibility for the actions of their agents. And finally, that the lies and evasions which have characterised British state policy in relation to the murders are forever purged from the history books."

Sinn Féin MLA Raymond McCartney spoke about the effect which Bloody Sunday had on him, saying that it remained one of the seminal days of his life, an experience shared by many others of his generation.

"Whatever idealism we had that the Civil Rights Movement could deliver for us equality of opportunity and citizenship; whatever hope we had that those who created and nurtured the Northern state would accede to those demands, ended as we watched the 1st Battalion of the Parachute Regiment charge up this street 34 years ago.

"Our hope and idealism collided with the might of the British state and it lay crushed alongside those who were killed and wounded only yards from where we now gather."

"They decree that political opposition is unlawful and that activists are classed as enemies of the state and therefore not 'true democrats' — all neatly packaged within a policy of demonisation and criminalisation. That is why the march on Bloody Sunday was deemed illegal and banned."

He reminded those present that 2006 also marks the 25th anniversary of the Hunger Strikes. "Ten men died to defend the integrity of the struggle for justice and equality. They defeated Britain's policy of demonisation and criminalisation. Let us re-affirm those who ignore the legacy of the H-Block/Amagh Hunger Strikes — that we will not allow our struggle to be criminalised. Ever."

He also spoke about the current difficulties in the Peace Process and called on unionists to enter into genuine power-sharing with nationalists. "They have run out of excuses," he said, "and their rationale from not engaging is threadbare. Now is the time for all those who are genuinely interested in seeing the Peace Process advanced to show leadership and make a real and genuine effort to end the political vacuum."