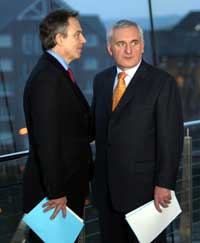 Moving forward was a shared theme in the past week with Irish President Mary McAleese reclaiming the ideals of the 1916 Rebellion, Taoiseach Bertie Ahern reiterating support for the Good Friday Agreement and British PM Tony Blair warning against political paralysis within the Peace Process.

With a date set for the resumption of political talks involving the two governments and all the parties in the North in early February both the Taoiseach and Prime Minister were insisting that standing still was not a viable option. After meeting Ahern in Dublin, Blair warned against continuing political stalemate.

"However benign or placid things may appear, whilst that stalemate continues, actually underneath the surface there are all the currents of instability present when there is not a true forceful direction bringing the process forward. This is not a situation where we can simply maintain the present status quo. We have got to move it forward," said Blair.

"This is not a time for sitting back. It's not a time for complacency. We cannot afford a prolonged stalemate. We have to complete the transition to peace and prosperity for all the citizens of Northern Ireland," said Ahern.

Meanwhile, Mary McAleese was drawing on the republican visionaries of the past as a road map for the future and beyond the Good Friday Agreement towards the full realisation of the Proclamation and a United Ireland.

"With each passing year, post-Rising Ireland reveals itself and we, who are of this strong independent and high achieving Ireland would do well to ponder the extent to which today's freedoms, values, ambitions and success rest on that perilous and militarily doomed undertaking of nine decades ago and on the words of the Proclamation," said McAleese in an opening address to a conference in Dublin last week.

The Proclamation spoke of freedom, ownership, religious and civil liberty, universal suffrage, equal rights and equal opportunities. It may have seemed naïve 90 years ago but "to our 21st Century ears these words seen fit for our modern democracy", said McAleese.

"In the longer term the apparent naivety of the words of the Proclamation has filled out into a widely shared political philosophy of equality and social inclusion in tune with the contemporary spirit of democracy, human rights and equality," she said.

For many years the social agenda of the Rising represented an unrealistic aspiration but now growing prosperity has created a real opportunity for ending poverty and promoting true equality.

"The kind of Ireland the heroes of the Rising aspired to was based on an inclusivity that, famously, would "cherish all the children of the nation equally — oblivious of the differences which have divided a minority from the majority in the past," she said.

McAleese identifies the republican adherence to the notion of inclusivity as particularly significant in relation to the current Peace Process.

"The culture of inclusivity is manifestly a strong contemporary impulse working its way through relationships within the North, with unionists, with the newcomers to our shores, with our marginalised and our own increasing diversity," said McAleese.

Claiming that the Good Friday Agreement "ends for ever one of the Rising's most difficult legacies", how people view partition, McAleese said unionists and nationalists have everything to gain from treating each other with generosity and respect.

"In the hearts of those who took part in the Rising, in what was then an undivided Ireland, was an unshakeable belief that, whatever our personal political or religious perspectives, there was huge potential for an Ireland in which loyalist, republican, unionist, nationalist, Catholic, Protestant, atheist, agnostic pulled together to build a shared future, owned by one and all," said McAleese.

It's all a far cry from anti-Agreement resistance to power sharing, DUP calls for the exclusion of republicans through a a period of "decontamination", the unionist veto and the unaccountable, anti-democratic workings of the IMC. Here moving forward isn't the preoccupation but rather holding on to a discredited past.

Speaking as the IMC delivered its latest report to the two governments Sinn Féin MP for Newry and Armagh Conor Murphy said it was time to end the negative role played by the IMC and remove the veto it is attempting to exercise over peoples democratic rights and entitlements.

"It has now been established that the IMC is little more that a tool of British securocrats hostile to the development of the Peace Process. It complies reports based totally on information supplied by the political detectives, the same people who engineered the collapse of the political institutions in 2002," said Murphy.

"The IMC operates entirely outside the terms of the Good Friday Agreement. It is attempting to exercise a veto over the democratic rights and entitlements of people on this island and the time has long since passed to end the negative role this body plays in the wider peace process," said the Sinn Féin MLA.

"Given the make-up of the IMC their reports and recommendations are politically loaded, discriminatory and they subvert the democratic rights of the electorate who voted for the Agreement," said Murphy.

But if the sound bites emerging from Dublin and Belfast were at political polar opposites, Derry was providing just a glimmer of hope to bridge the divide.

Alan McBride lost his wife and father-in-law in an IRA bombing on the Shankill Road in 1993. Delivering the annual Bloody Sunday commemorative lecture, Alan McBride described the "sheer hell" he experienced after his wife, Sharon's death and how he had channelled his anger by working with young people from all sides of the community.

"I've been on a journey now for 13 years, since Sharon was killed. I've come through a whole gamut of different experiences, emotions and feelings and yet through it all the only thing that has really kept me going is my faith in the Peace Process and the possibility that one day we will have a country that is better than it was," said McBride.

McBride said he had invested heavily in the peace process "actively campaigning for a yes vote in the Good Friday Agreement".

"However I feel badly let down by politicians on both sides. It is almost eight years after the signing of the Good Friday Agreement and we still haven't got an assembly. This is nothing short of shameful.

"This needs to be addressed as a matter of urgency without each side blaming the other in a process that goes round and round but delivers nothing. Nothing is going to replace the Good Friday Agreement. There are people who are saying we can move on without others but this is not going to happen.

"The best memorial we can have to those who died is to create a society where these things never happen again, a society where we, as republicans and unionists, can share what we have in common and a better place for our children," he said.