Decommission this tool of the securocrats 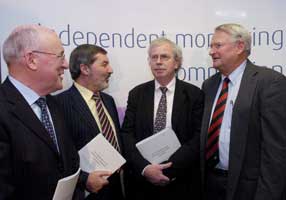 The IMC - In breach of the Good Friday Agreement

Early in December 2005 Sinn Féin's Conor Murphy MP began proceedings in the High Court in London to have the establishment of the so-called Independent Monitoring Commission (IMC) declared unlawful.

• The IMC's right to recommend sanctions against political parties

• The IMC's lack of independence

• The IMC's procedures and failure to apply proper standards of proof in arriving at conclusions or attributions of responsibility for various activities.

Sinn Féin opposed the establishment of the Independent Monitoring Commission in January 2004 describing it as a breach of the Good Friday Agreement.

Its ability to recommend sanctions against a political party is fundamentally undemocratic and a subversion of the rights of citizens to vote for representatives of their choice.

It was a concession to the UUP's David Trimble and has been used successfully by anti-agreement unionists and elements within the British system to delay and frustrate the implementation of the Good Friday Agreement.

The IMC is not independent. Its four members are all political appointees who bring to their task their own political baggage.

John Alderdice is a former leader of the Alliance Party and an avowed political opponent of Sinn Féin. Alderdice is currently the President of the International Liberal Alliance.

Another member, John Grieve is a former Deputy Assistant Commissioner of the London Metropolitan Police and National Co-ordinator for Counter Terrorism who at one stage expressed a desire to become an Assistant Chief Constable in the RUC, a force he apparently held in high regard. John Grieve is the Chairman of the John Grieve Centre for Policing and Community Safety. The John Grieve Centre receives financial payments from the PSNI whose members deliver lectures and receive training at the centre. Ronnie Flanagan, former Chief Constable of the RUC is a Board member.

Another member is Richard Kerr, former Deputy Director of the CIA.

The other IMC member, Joe Brosnan is a former senior official on the Irish Department of Justice.

The IMC's primary sources for information are from within the ranks of the PSNI, British Army, NIO and others within the British security system — the same people who have been behind a whole series of allegations and politically-motivated actions against republicans, including the disgraceful arrest of Sinn Féin MLA Francie Brolly, and the raid on Sinn Féin's office at Stormont.

These are the same people and agencies who were indicted in the Barron Report, in the Cory Report and who stand accused of involvement in decades of torture and murder, including colluding with unionist paramilitary death squads.

Occasionally information is drawn from the unsubstantiated accusations of political opponents of Sinn Féin.

When challenged by solicitors about the standards of proof it applies to the information it receives and publishes the IMC said: "We are not bound by the strict rules of evidence applicable in a court of law."

The IMC's conclusions are based on untested and unpublished information from unidentified sources which are inherently unreliable and are incapable of verification. It therefore sits in judgment on Sinn Féin and on its electorate without any fair or public hearing.

When Sinn Féin asked the IMC what standards of proof it employed to reach its conclusions it couldn't say. It could only suggest that the party should not approach the IMC as it would a court of law, or a tribunal.

The IMC regards itself as 'unique'. The 'uniqueness' of the standards of proof they apply can be gauged from their liberal use of phrases such as 'we believe', 'we are persuaded', 'may be attributable', 'we are convinced', 'we are satisfied' etc, etc, without ever presenting a single shred of evidence to back up its assertions.

Moreover, while accepting that Sinn Féin is not in a position to determine the policies or operational strategies of the IRA the IMC has, on the basis of alleged activities by the IRA, recommended sanctions against Sinn Féin which penalises the party's electorate and benefits its opponents. This is entirely undemocratic.

In February 2005 the IMC issued a report, without evidence of any kind, in which it alleged that senior members of Sinn Féin sanctioned the Northern Bank robbery, as well as other robberies.

It also managed to present reports on loyalist paramilitary violence without mentioning, even once, the role of the Special Branch, British agents or the issue of collusion. In fact, the reports have reduced unionist paramilitary activity to a postscript and exonerated the British state entirely.

Quite apart from the political bias it has shown the commission has also displayed a degree of incompetence which is entirely unacceptable. For example, they wrongly attributed the death of Michael O'Hare in a fire in Bangor in March 2003 to unionist paramilitaries. This was subsequently found to be untrue.

In its October 2005 report, the IMC made a series of unsubstantiated allegations against the IRA which do not stand up to scrutiny. For example they refer to two assaults which they attribute to the IRA. We questioned the truth of these allegations and asked for information on these two assaults from the British Government. Neither the IMC nor the two governments have been able to provide any evidence that these incidents ever occurred.

Sinn Féin rejects the partisan quango that is the IMC and rejects its attacks on the party and its electorate. The IMC is a tool of British securocrats.