The IMC has no place in the political process - McGuinness 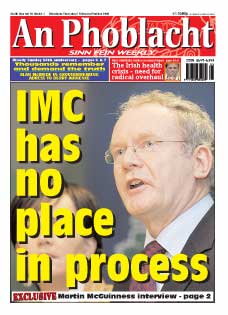 Last Wednesday evening, in the aftermath of the latest report from the discredited and non-independent IMC, Sinn Féin Chief Negotiator Martin McGuinness spoke to An Phoblacht about the undemocratic nature of that body and its malign influence on the political process. He also spoke about the challeges which now face both governments and the political parties to move the political process forward.

The IMC has no place in the political process - McGuinness

In its report the IMC made various allegations against the IRA saying that it was involved in intelligence gathering and criminality. However in a surprise report submitted to the British and Irish Governments, Canadian General John de Chastelain`s decommissioning body revealed that the accusations were made against the the IRA last week by 'security sources' in the Six Counties.

The disarmament body revealed it launched a probe into the assessment to find out whether it had been misinformed or had made a misjudgement when IRA weapons destruction was announced.

But with the gardai insisting it had no intelligence to corroborate the claims, the Independent International Commission on Decommissioning (IICD) said it stood by its statement of last September regarding IRA arms.

Speaking to An Phoblacht afterv the publication of the IMC report Martin McGuinness said: "The non-independent IMC has no place in the political process. It is no part of the Good Friday Agreement. It effectively subverts the democratic mandate of all the political parties but it is specifically targeted at Sinn Féin."

"The individuals who make up the IMC and the group collectively is hostile to Irish republicanism and are a proxy for political policing. Those who supply the information for the IMC reports include DUP supporters in the Special Branch. They are the same people who collapsed the political institutions and who 10 years ago were controlling and directing a murder campaign against Sinn Féin members and the wider nationalist community.

"These are the same sort of people who provided information to the British government on what was called the 'weapons of mass destruction' in Iraq, which has led to the deaths of tens of thousands of innocent people and soldiers from the American and British armies. And of course, drawing from our own experience, it was on tittle-tattle like this that people were interned without trial in the 1970s. So it is absolutely unacceptable that the entire political process is being held to ransom by these people," said McGuinness.

Sinn Féin has challeneged the IMC and the two governments to produce evidence to back up the allegations contained in other IMC reports and they have all failed to do so. In the aftermath of the last IMC report McGuinness challeneged John Alderdice when he met him to explain the circumstances in which the report alleged that a person was 'punishment-shot' by the IRA after the July 28 statement last year.

"He was unable to tell me anything. I have also asked both governments for more information on this shooting and they have been unable to tell me anything, as they have been unable to do in relation to another incident where I challenged them about the alleged punishhment beating of someone prior to the 28 July. So they failed in that account also. And in the course of this report today they are actually talking about, to quote them 'at least six unreported assaults have come to our attention'.".

The latest IMC report is a continuation of the previous reports where innuendo was used to smear republicans.

"Given the history of the IMC and its overtly political, anti-republican agenda, many people, particularly from the broad nationalist community will be rightly dismissive and sceptical of anything detailed in their reports," says McGuinness.

"There is a particularly offensive section in the report in which they are effectively making allegations that republican communities are havens of criminality. I find that offensive, inaccurate and politically biased. Our view in Sinn Féin is that when there is evidence of crime, then due process must take its course.

"People must ask the question, that if there is evidence of criminality, and of course you have the combined forces of the Guards, the PSNI and British Intelligence working on this, then why have people not been brought before the courts?

"People have to decide if they want to live in a democratic state where people are innocent until evidence is placed before a court and they are found guilty," says McGuinness.

Importantly the IMC report has effectively been challenged by the IICD which is a body established under the terms of the Good Friday Agreement and which unlike the IMC is independent. The IICD are very clearly standing by their assessment of September regarding IRA arms. "You actually have the IICD not being prepared to accept information provided to the IMC, and to them, by these anti-Sinn Féin elements within the PSNI. We have a body that was established under the GFA clashing with a body that wasn't," says McGuinness.

The IMC's website says that its first guiding principle is that the rule of law is fundamental in a democratic society. They also say that the law can be legitimately enforced only by duly appointed and accountable law enforcement officers or institutions, and that any other forcible imposition of standards is unlawful and undemocratic. In many ways this can be applied to the IMC itself. Martin McGuinness says that "If we do live in a democratic society then people have to be considered innocent until proven guilty."

He says the IMC have to be challeneged by anyone who is a democrat to produce the evidence. "If people are involved in this type of activity then people should be arrested and they should be brought before the courts. The fact is that there has been a dismal failure on behalf of the PSNI and the RUC before them if you consider that some 15,000 republican prisoners passed through jails in the North and in spite of their worst efforts, they have not been able to criminalise republicans.

"We are now facing in to a situation where the two governments have made it clear that they want to see the institutions of the GFA restored and after last week's meeting between the Taoiseach and Tony Blair there was a very clear indicator that they wanted to see those institutions up within the month.

"We have to ask who is blocking the establishment of the institutions. It is certainly not Sinn Féin. The only party holding out against this is the DUP."

Political talks start next Monday at Hillsborough Castle and are expected to continue for some weeks. The two governments have indicated that their sole interest is a big push to restore the institutions. McGuinness belives that, "we have to focus the agenda onto those talks and whether or not the DUP are going to do the business. Prior to publication of the IMC report the DUP were saying it didn't really matter what was in it, that they were still not prepared to go into government with Sinn féin. That shapes up for a real challenge from the government's point of view. They have to meet and deal with that over the course of the coming period."