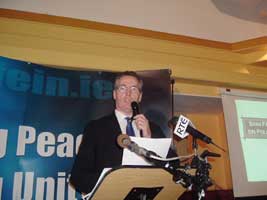 With the British government due, next month, to publish enabling legislation and a consultation paper on the transfer of policing powers and the administration of justice to locally elected politicians in the North, in the event of the re-establishment of an assembly, Sinn Féin members gathered at a West Belfast hotel on Saturday, 14 January for a party conference on the issues of policing and justice.

Entitled Developing an All-Ireland Vision for Policing and Justice, the conference, held in the Balmoral Hotel, saw up to 200 gathering to debate the party's vision for policing across the island.

The keynote address was given by Gerry Kelly, Sinn Féin Spokesperson on Policing and Justice. He said nationalists in the north and people throughout Ireland were looking to Sinn Féin for leadership on policing and justice.

Republicans would not be badgered into accepting less than the new beginning to policing promised in the Good Friday Agreement. The RUC was a unionist militia that engaged in torture and murder. The RUC Special Branch was still active within the PSNI and planned to overthrow a democratically elected government in 2003. They opposed any change in policing.

It was not Sinn Féin but others who are delaying progress. "No one wants a new beginning to policing and justice more than the nationalist and republican people of West Belfast, West Tyrone and South Armagh."

He said there was a real anxiety about the extent and effects of criminality, which republicans ignored at their peril.

The evidence of political policing was irrefutable, Kelly said. It could be seen in the policing of loyalist marches, in revelations about RUC members stealing information and thwarting murder investigations, the discovery that files on republicans had been passed to unionist paramilitaries, politically motivated house raids, trumped up charges and media misinformation, and high-profile arrests and false accusations against Sinn Fein representatives.

He said the SDLP were partly to blame for the current situation by jumping too soon and endorsed existing policing arrangements. "In four years on the Policing Board, they have failed to hold the political detectives publicly to account", he said and pointed out that SDLP MPs voted for 28-day detention orders, "taking us back to the days of the old Special Powers Act so opposed by the Civil Rights Movement". In Kelly's view, the SDLP were now part of the police establishment, standing against further change.

He said that the job given to the Sinn Féin negotiations team is to achieve a new beginning to policing and justice. "We have made significant progress especially through new legislation. Even when the SDLP and Irish government jumped ship, Sinn Féin was able to achieve more necessary change."

Republicans needed to be acutely aware that if the Sinn Fein leadership achieves the objectives set in this area then "this in turn will present further challenges for all activists".

"There is a public commitment if we reach that point to then put proposals to our membership and nationalism as a whole. While we are not at that point yet, activists need to realise that we can achieve it and with achievement there comes further responsibility," he said.

Last December in theory at least, republicans were within months of a decisive debate on the issue. Delegates were encouraged to go back to their areas and open up the debate within Sinn Féin and their communities. "I repeat that call today. Keep that discussion going", Kelly said.

He said that at the core of Sinn Féin's position is the establishment of a threshold, which enables the creation of democratically accountable, representative civic policing and the consignment of political policing to the dustbin of history.

"That is why Sinn Fein has made this issue a core part of negotiations. In those negotiations, the key outstanding matter is the transfer of powers on policing and justice away from London and out of the hands of British securocrats, into restored local Assembly and all-Ireland institutions, said Kelly.

"Next month, the British government is pledged to publish enabling legislation and a detailed consultation paper on transfer of powers. Both governments know that this will not be enough on its own to honour the commitments given. The devil as they say is in the detail. That will be where the battle will become most fierce. Because this is not some sham fight or academic debate about the number of clauses in a piece of legislation or the sequence in which they run. This is about giving expression in law to the transfer of powers, taking powers away from London and out of the hands of the British securocrats. It is about sovereignty, accountability and political change," He said.

On the issue of policing in the 26 Counties Gerry Kelly asked: "Who polices the Gardai? Why has the police ombudsman in the South not got equal powers to that of the ombudsman in the North? What lessons have been learned from the McBrearty family and others?

He concluded his address saying it was a crucial year in the peace process. "Whatever happens in negotiations, key issues such as policing and justice cannot be put on the shelf to be dusted down when we achieve a united Ireland. People want us to deal with the everyday issues as well as the big picture."

Paul O'Mahoney described the Irish Government's attitude to justice issues in the 26 Counties as, "hidebound, conservative, reactive and fatalistic".

He said the Department of Justice was, "ineffective and locked into a culture of crisis management". The Dublin government had no vision when it came to dealing with the issues of crime and justice and it believed success or failure was measured in economic terms.

O'Mahoney maintained that the ideology that prevails, and which is at the heart of Michael McDowell's Justice Department, is that punishment works.

Paddy Hillyard argued that instead of talking in terms of crime we should look at how harm is done. His argument was based on the reality that while society was focused, through the media, on violent crimes- in 2003\4 there were 853 homicides in England and Wales. In the same year there were 24,000 deaths through hypothermia.

Society needed to put crime in perspective and deal with the 'harms' that exist especially given that so much of these 'harms' were rooted in today's society and the unequal distribution of wealth and power.

Criminologist Phil Scratton told of how he had visited four Traveller women in Maghaberry prison, County Antrim. Three were imprisoned for the non-payment of TV licenses while the fourth hadn't paid a dog license. This is how the marginalised and poor are dealt with, he said.

He attacked the notion that wrong doers must be punished "these punitive responses are used against people who are struggling to make ends meet", said Scratton. He called for community-based responses to crime and for mental health care and counselling for 'offenders'.