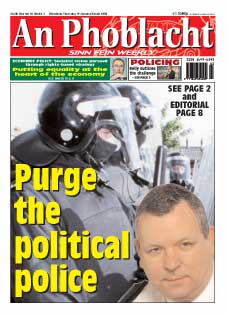 Political policing: "Dissidents like Kinkaid should be seen off" — Kelly

In a so-called confidential briefing given to the North's policing board, widely reported in the media, PSNI Assistant Chief Constable Sam Kinkaid accused the IRA of being involved in, "organised crime".

The PSNI boss's remarks were rubbished by Sinn Féin Policing Spokesperson Gerry Kelly who said: "It is no accident that his comments are made at this time, just two weeks in advance of an expected report from the IMC.

"This is a last-ditch effort from securocrats who have opposed both political change and changes in policing since the start of the peace process," added Kelly.

And reacting to the predictable DUP response to Kinkaid's remarks Kelly said: "These spurious allegations will no doubt be seized upon by the DUP and others who have set their face against the democratic rights of citizens. The Irish and British Governments need to uphold those rights and to see off dissidents like Sam Kinkaid."

The latest political intervention by the PSNI aimed at derailing the political process in the North was made by senior PSNI member Sam Kinkaid on Tuesday 17 January while delivering a, 'confidential briefing' to the Policing Board. Alan McQuillan, who retired from the PSNI to take up the post as head of the Assets Recovery Agency, also attended the meeting.

Kinkaid's remarks have been widely reported in the media and are being used by the DUP as justification for refusing to take a full part in talks, expected next month, to resolve the present impasse in the Peace Process.

And with an IMC report due to be published within the next two weeks it is clear Kinkaid's remarks were designed to influence that report also.

As head of the PSNI's Crime Operations Department (COD) Kinkaid has overall control of PSNI operations.

He re-opened the investigation into the 1972 Claudy bombings and as part of that investigation would have had responsibility for the high profile arrest of Sinn Féin Assembly member Francie Brolly.

Brolly was taken from his Dungiven home on Tuesday 29 November and as the PSNI surrounded his home, media crews who were clearly briefed, reported his arrest and that he was being questioned about the Claudy bombings.

With speculation rife that Kinkaid is set to retire next month it may be that he took his chance to damage the Peace Process knowing that his remarks would have been seized upon by anti-Agreement unionists and used to undermine the chance of political progress.

Alternatively, as head of the COD, some of whose operations are being scrutinised by the Police Ombudsman, it may well be that Kinkaid is retiring to avoid censure.

Sinn Féin President Gerry Adams raised the issue with a US political delegation to Belfast.