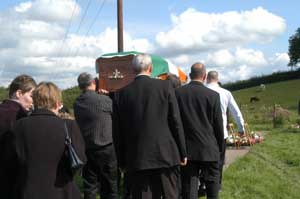 Omagh became a poorer place on 30 August with the sudden death of Kevin 'Beaver' Kearns.

Beaver joined the Republican Movement in the early '70's and was subsequently jailed for his activities. On his release from Long Kesh he married his sweetheart Maresa and they had five children, Colm, Ciarán, Pól, Daniel and Joanne.

Beaver then threw himself into community politics and was a founder member of the Hunter Crescent Tenants' Association. He was also heavily involved in the local Billy Reid Sinn Féin Cumann.

His proudest moment came in 2005 with the election for the first time of two Sinn Féin Councillors for Omagh Town. He also helped secure the withdrawal of the British Army from Lisanelly Barracks.

Sinn Féin Vice President Pat Doherty gave the oration in which he said: "Kevin was a great Sinn Féin activist, he was also a great community activist but most of all he was a great man."