Decision plays into hands of those opposed to Peace Process 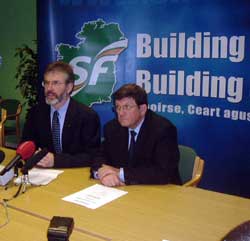 "Our position on policing is very clear. The British Government has agreed to honour certain commitments made on the policing issue. When they do this I will honour commitments I have made including going to a special party Ard Fheis to deal with this matter.

"The visa position is absurd. I am expected to go to New York and not attend the most important Friends of Sinn Féin funding event of the year, an event incidentally that will go ahead as planned. The decision robs me of the opportunity to speak in person to over 1,000 US citizens who have consistently supported the Peace Process.

"They want to hear how we can make best use of the recent historic republican initiatives to move the Peace Process forward.

"I particularly regret that this decision means that I cannot attend the National Committee on American Foreign Policy dinner and thank them and their Chairperson Bill Flynn for their positive work in the Irish Peace Process over many years. It is particularly disappointing to me that I cannot take this opportunity to praise their work as it was the NCAFP who broke the visa denial eleven years ago.

"I am especially concerned that this decision will play into the hands of those who don't want too engage in the Peace Process.