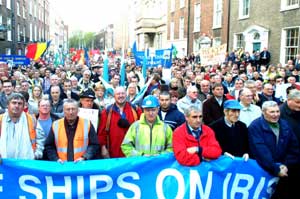 The combined voices of 10,000 workers, four political parties and the Trade Union Movement have all called on the Dublin Government to intervene in the Irish Ferries dispute which returned to the Labour Court this week after one of the largest trade union marches seen in Dublin in over a decade.

Quality of all jobs at stake

At stake are not just the jobs of the 500 ferry workers or all Irish shipping workers but also the quality of life and working conditions of all Irish citizens. The scandal of unpaid GAMA workers and last weekend's rescue of Latvian periwinkle pickers abandoned to the elements on a small island off Skerries are just some of the examples we know of where workers in Ireland are being mistreated and exploited.

Last week's rally culminated outside Leinster House with speeches and messages of support from trade unions in Europe and Irish political parties including Sinn Féin, who have raised the case in both the Leinster House and European Parliaments as well as with the EU Commission.

SIPTU President Jack O'Connor said every worker "whether he comes from Wexford or from Warsaw has a right to be treated with courtesy, decency and respect".

International Transport Federation co-ordinator for France, Francois Caillou said that the dispute is, "not only an Irish problem, it is a European problem".

"There is no place on our seas for flags of convenience. There should be only Irish, French and UK flags, with staff working under Irish, French or UK registered agreements," said Caillou.

Seaman's Union of Ireland General Secretary Bobby Carrick said seafarers had been fighting displacement of crews by Irish Ferries for over a year received nothing from Government Ministers except empty expressions of concern.

ICTU General Secretary David Begg targeted the double standards in the Irish Ferries management highlighting last year's €20 million profit, and pointing out that the company rejected the report of not one but two sets of consultants who offered alternatives to cheap labour options.

Begg also said that "even if a case of genuine competitive pressure could be established it would still be morally wrong to address it by paying wages of €3.60 an hour to its workforce. The obscenity of that is made ever more acute by the fact that its chief executive enjoyed a salary increase of €35,000.

Workers not just in Ireland, but across Europe and the world are interdependent. We need to get paid justly for our labour wherever we live to buy the necessities of life and nourish our families. The wage someone gets is linked too often only to the profits others can make rather than the prices workers need to pay for goods and services.

Irish Ferries, by selling a good in a high-income labour market using workers from a low-income one, paid subsistence wages, in working conditions not legal under Irish labour law, are trying to break that relationship. They must not be allowed to do it. It is not acceptable in Ireland, the EU or anywhere in the world.

Sinn Féin President Gerry Adams MP sent a letter to the marchers last week expressing the party's "solidarity with Irish Ferries workers. Adams said: "We congratulate you for standing up and defending your rights in the face of corporate greed. If you did not do this, workers present and future would suffer, and terms and conditions won over many years would be swept away.

"The displacement of Irish workers at a profitable company is unacceptable. The exploitation of workers on board ferries operating under flags of convenience out of Irish ports must not be permitted. To the migrant workers on board the Normandy we vow to continue to raise the unacceptable regime on that ship in the Dáil, the European Parliament and elsewhere."

The attendance of a large amount of Sinn Féin activists alongside elected representatives like Sinn Féin Employment spokesperson Arthur Morgan TD, Dublin City Councillor Daithí Doolan, is just the latest in a series of actions by Sinn Féin on the Irish Ferries problem.

Morgan has raised Irish Ferries in Leinster House and put down motions calling on the government to give debating time to the issue. He was expelled over it on one occasion while Caoimhghín O Caoláin TD has raised the matter several times during leaders questions.

MEP Mary Lou McDonald raised the issue formally with the EU Commission while also calling on Internal market Commissioner Charlie McCreevey to lend his support to the re-introduction of a European Ferries Directive. McDonald has met with McCreevey to raise the plight of the 500 Irish Ferries' workers. She said: "We congratulate you for standing up and defending your rights in the face of corporate greed. If you did not do this, workers present and future would suffer."

Mary Lou said it was incumbent on McCreevey to lend his support for the re-introduction of the directive which would deal with ships operating in European waters under flags of convenience and for minimum labour standards to be set.