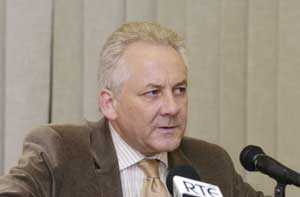 Industrial action on Monday by the Communications Workers' Union (CWU) could have been averted at any stage over the weekend if An Post management had been willing to accept proposals from the National Implementation Body (NIB) comprising representatives of government, employers and trade unions.

CWU General Secretary Steve Fitzpatrick announced the suspension of industrial action, which had consisted of a ban on overtime and the closure of certain offices, on Monday afternoon, following An Post's decision to accept proposals put forward by the NIB.

CWU National Officer Seán McDonagh told An Phoblacht that he believed direct intervention from the Taoiseach's office had led to management's change of heart.

The examination is expected to last until the middle of next week and the union will study proposals made as a result of the process. Suspension of industrial action means a further ballot is not required and the union can immediately resume protests if necessary.

In a related development, 30 customer service staff in An Post remain idle as we go to print following the decision of management to outsource the customer service section on Monday to a private firm in Cork due to industrial action.

As the dispute at Doyle Concrete grinds into its sixth week Sinn Féin Employment spokesperson Arthur Morgan TD, has strongly criticised the owners and management of the Rathangan firm for attempting to force their current workforce out so that they can employ cheaper labour. His comments follow the decision by the company to refuse to implement the terms of a Labour Court recommendation aimed at resolving the dispute. The court's decision, binding on the union, had completely vindicated SIPTU's position.

"Attempts by management and owners of Doyle Concrete to bully workers into accepting intolerable terms of conditions of employment is outrageous and must be rejected," said Morgan. The arrogance of this company is breathtaking. Taking their lead from Irish Ferries they basically held a gun to the head of workers to accept shameful redundancy terms so the company can maximise its profits by employing cheaper labour.

A rally in support of the strikers is planned for 2pm in Rathangan on 20 November.

Almost 18 months ago 19 Chinese cockle-pickers in Morecombe Bay in England died when they were caught in rising tides, sparking calls for more protection of migrant workers. Gardaí are now questioning a County Louth boatman who stranded 13 Latvian migrant workers on an uninhabited island off Skerries, County Dublin where they had been sent to pick periwinkles.

Abandoned on the island without food or adequate clothing they were rescued by Skerries lifeboat after they alerted friends on the mainland by phone. The workers have since disappeared and are refusing pleas from the Gardaí and unions to come forward.

Sinn Féin TD Seán Crowe raised the issue in Leinster House on Tuesday calling for a special debate. "The Minister for Enterprise, Trade and Employment must take greater measures to prevent to exploitation and mistreatment of migrant workers," he told the Dáil. "This latest incident, with the GAMA and Irish Ferries disputes fresh in people's minds must bring be used to focus our energies on forcing the Government to stand up for migrant workers."