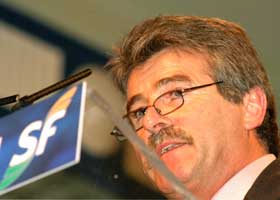 Grassroots members of Fianna Fáil were challenged to "step back and re-appraise whether that party any longer represents their aspirations for a united Ireland". The call was made by Arthur Morgan TD during the final day of the Sinn Féin sponsored debate on Irish unity. Concluding it Morgan described the Government amendment to the motion as "absurd" saying it would make the whole Peace Process "dependent on the response of rejectionist unionism".

Earlier, Dublin Southwest TD Seán Crowe spelled out why Sinn Féin believes unionists have nothing to fear from a united Ireland: "When we say to unionists that yes we unashamedly advocate a United Ireland we do so, not to antagonise them, but because it makes economic and social sense. And not just for republicans but for all the people of Ireland, North and South, East and West, Catholic, Protestant and Dissenter, Muslim and Jew, Agnostic and Atheist.

"Unionism should not underestimate the political clout they will have in a united Ireland. They will go from being a tiny minority to something like 20% of the population."

Crowe said unionists would be "significant players" and "exert real control over their destiny" in a united Ireland. "This is in stark contrast to their current position."

"They will have the ability to implement coherent social and economic policies on the basis of Ireland as a whole rather than have them decided in Westminster where their interests must be negotiated with Britain."

Concluding he said: "Unionists have absolutely nothing to fear and everything to gain from a united Ireland. It is inevitable and we ask you to join us as partners in building a new Ireland."

Arthur Morgan rounded on the establishment parties for opposing the Sinn Féin motion and criticised the Government amendment for failing to even mention the words 'Irish unity'.

"The Sinn Féin motion was succinct and straightforward. There was not one word in it that any reasonable person could object to, let alone those who claim to be committed to unity.

"This motion was put forward in the spirit of constructiveness with the aim of achieving a consensus among the parties in this House, who avow to support unity, regarding how this state prepares politically, socially and economically for Irish unification.

Why is it that Fianna Fáil in particular are running away from having a constructive debate on Irish unity? All reference to unity is absent from the amendment put forward by the Government. Taoiseach, when will you live up to the ideals of Pádraig Pearse, whose picture adorns your office wall?"

Morgan referred directly to a section of the Government amendment that said, 'opposes any political move or initiative which would increase tensions between the two main traditions on this island'.

"This is an absurd notion that would see the process stagnate and would make the process dependent on the response of rejectionist unionism. Arguably to advocate the restoration of the institutions is enough to increase tensions among some sections of unionism. Who could accept that element of the Government amendment?" Morgan asked.

"I challenge grassroots members of Fianna Fáil to step back and re-appraise whether that party any longer represents their aspirations for a United Ireland, to ask themselves if they are satisfied with empty rhetoric which is not matched by actions. Are the PDs going to be allowed to dump the Taoiseach's proposal for very limited participation of Six-County MPs here?

He then turned to Fine Gael, Labour and the PD's. "It seems that for Fine Gael and the PDs to seek to unite Ireland by peaceful means is inflammatory and will destabilise unionism. To invite all MPs from the North to participate even in a very limited way in this Oireachtas will offend unionists. But it seems that it doesn't matter that the refusal to work for Irish unity will disappoint nationalists in the Six Counties. It doesn't matter that Fine Gael, Labour and the PDs have slammed the door in the faces of the SDLP and Sinn Féin, the representatives of nationalists in the North. That is what the opposition of these parties to the Taoiseach's proposal means. The sensitivities of nationalists mean nothing to these parties."

He accused the Labour Party of taking "its policy lead on the issue" from Fine Gael, which he said had its roots in the fascist movement. He said he was "surprised that a party which claims to follow in the footsteps of Connolly is opposing even limited Northern representation."

"I know many members within the Labour Party aspire to a United Ireland and are genuine in their adherence to the ideals of Connolly who vociferously opposed any partition of Ireland and warned of the "carnival of reaction" that would follow the cutting of Ireland to "pieces as a corpse would be cut upon the dissecting table".

Concluding, Morgan said: "There is an imperative for us to begin the preparations for Irish unity now. Sinn Féin has set out our vision of an inclusive Ireland, a better Ireland, an Ireland where diversity is valued and the greatest possible participation of the people of the island in the civil and political life of the country is a primary objective. We are working to create an Irish republic which vindicates the rights and entitlements set out in the 1916 Proclamation and the Democratic Programme of the First Dáil."

Meanwhile, Sligo County Council has supported a Sinn Féin motion seeking a Green Paper on Irish unity and calling on the Irish Government to initiate a consultation process across society on the future shape of a new Ireland

Proposed by Councillor Seán MacManus and agreed at the County Council meeting on Monday, 7 November the motion said:

'That Sligo County Council welcomes the recent proposals for a Green paper on national re-unification, calling on the Irish Government to initiate a consultation process across society on the future shape of a new Ireland.

"That this Council also welcomes the SDLP's United Ireland Strategy -- A Better Way, A Better Ireland.

"That this Council recognises the need for adequate preparation in advance of re-unification and that this Council endorses the call for the Irish Government to lead an immediate and extensive consultation process with all sections of society -- including unionism — on a Green Paper for the re-unification of Ireland."