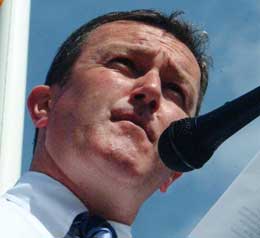 Legislation dealing with the issue of 'On The Runs' (OTRs) has been published by the British Government and has been broadly welcomed by Sinn Féin.

The proposals cover around 150 people 'on the run' since the introduction of Internment in the 1970s. Since the Good Friday Agreement the British Government has continued to refuse to let many people return to the North without facing imprisonment.

The new legislation would allow men and women to have their cases heard by a special tribunal. If found guilty, they would be freed on licence.

The 26-County Government also announced on Wednesday that it would be setting up an 'Eligibility Body' to deal with the issue.

Speaking from London on Wednesday 9 November, the day the British legislation was published, Sinn Féin MP Conor Murphy said it was past time for both Governments to address the matter.

"This is an outstanding issue, an anomaly from the Good Friday Agreement," he told An Phoblacht. "These people would have been freed as part of the early release scheme, so it makes no sense for them to still be sought by the authorities. The British Government has had this very publicly on its agenda for some time now. We believe that in many of these cases, there isn't even sufficient evidence for convictions.

"In any conflict resolution process there are from time to time issues like this which quite clearly need to be tackled and addressed in a sensible fashion if we are to build confidence in the future," he added.

The Bill is expected to get through the House of Commons, but will face stiff opposition in the House of Lords in January.