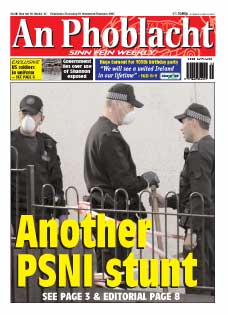 "The PSNI operation against republicans is being driven by the political agenda of securocrats within the PSNI," said Sinn Féin's Michelle Gildernew.

The MP for Fermanagh/South Tyrone was commenting following a series of raids and arrests in Tyrone, Down, Belfast and Derry being linked to last year's £26.5 million Northern Bank robbery.

The robbery has been repeatedly attributed to republicans by the PSNI and media despite the fact that to date no evidence supporting this assertion has emerged.

Gildernew was speaking after one of those arrested was released without charge. Media tip offs accompanied the arrest of Brian Arthurs, a well-known Tyrone republican.

The PSNI arrived at the Dungannon home of Brian Arthurs on Wednesday morning 2 November. Over five hours the PSNI removed 39 bags of personal property including children's course work and a child's birthday money. Arthurs was arrested and held for two days before being released.

Paula Arthurs woke to the screams of her youngest child as a PSNI raiding party punched and kicked their way into her home. "It was before seven in the morning. I awoke to the noise of banging and shouting. They were screaming, 'PSNI, PSNI, open the door, open the door'. They were kicking the front door and shouting very loudly," says Paula.

"My youngest child sleeps in a bedroom downstairs at the front and the PSNI were banging on his window with their fists. Declan is only eight-years-old and by the time I got to him he was hysterical with the shock and fear of it all.

"I opened the door and a number of PSNI officers pushed past me, ran upstairs and handcuffed by husband. Brian was immediately dragged from the house and taken away," says Paula.

"I was alone with the children, my two teenage daughters and son Declan. When my brother arrived at the house, the PSNI refused him entry, they physically threw him across the garden and then locked us in. I was effectively under house arrest," says Paula.

"I have experienced raiding since I was a child, it's not something I want for my children. Declan had never experienced a raid before. He has been utterly traumatised. My son can no longer sleep in his own room. His confidence has been badly shaken."

"I can't begin to describe how undermining the invasion of your home is for a child. A home is the centre of a child's security, but when the PSNI arrive, it counts for nothing," says Paula.

"I am really angry that because of the political agenda of some people, those who are determined to thwart political progress, those who don't want real change, and because of that my children have been subjected to this ordeal.

"It has already changed the way they view the world. Years of nurturing and preparing them for a new and more hopeful future has been lost in a moment. Last week the PSNI turned back the clock for me and my family," says Paula.

Commenting on the media's role, Brian Arthurs said the PSNI had only been at his home a short time before the television cameras arrived. "They must have been tipped off, how else could they have arrived so fast. I was set up through the media and my arrest was stage managed so it could appear on television throughout the country," he said.

Brian said his arrest had followed prolonged media campaign against him. "I've suspected for a while that with stories like this appearing in different newspapers I was being set up for something," said Arthurs.

The PSNI informed Arthurs' solicitor that his client was being held on the word of an unnamed intelligence source. "The PSNI do not have a scrap of evidence linking me to the robbery. They know I had nothing to do with it. Politicians talk about a new beginning to policing. There is no new beginning," he said.

A formal complaint has been lodged with the Police Ombudsman's office. "The PSNI subjected my family and myself to verbal and physical harassment. My teenage daughters had their A level and GCSE course work confiscated," said Arthurs.

"A PSNI detective threatened my eight-year-old son with being shot dead like his uncle. Declan was told to "get in the fucking house or we'll shoot you like your uncle". Brian Arthurs' brother Declan was shot dead by the SAS in Loughgall in 1987.

On Tuesday the quiet village of Kilcoo, County Down had been the focus of the PSNI operation. Two young men were arrested during raids on their families' homes. Twenty-two-year-old Peter Morgan was later released without charge. Accusing the PSNI of heavy handedness, Morgan said he had been "terrified by the aggressive manner of the PSNI".

"There is not one bit of evidence against me and there was no evidence produced during my arrest and detention," he said.

Meanwhile, 23-year-old Dominic McEvoy, also from Kilcoo, denied all charges against. According to the PSNI, McEvoy's DNA has been identified amongst a number of DNA samples of unidentified people connected to a hat discovered somewhere outside Loughinisland and allegedly linked to the robbery.

Sinn Féin's Martin McGuinness has described the PSNI case against a Coalisland man as "paper thin".

"I have learned this evening that the PSNI plan to charge a constituent of mine with failing to inform them that he sold a van similar to the one the PSNI believe may have been used in the robbery. This kind of ridiculous, phoney charge will fool nobody," said McGuinness.

Forty-three-year-old Martin McAliskey has denied attempting to pervert the course of justice in relation to the purchase and sale of a white van. He has been released on bail.

"As in the past, I am quite sure that this and other cases will collapse but not of course in the blaze of publicity generated by the PSNI in recent days," said McGuinness.

"The PSNI, realising the widespread anger caused within the nationalist community, appear to be trying to justify their operation with what can only be described as paper-thin cases," he said.

According to the media a third man from Kilcoo has been arrested, a 40-year-old Belfast man and another man from Derry are also being held.