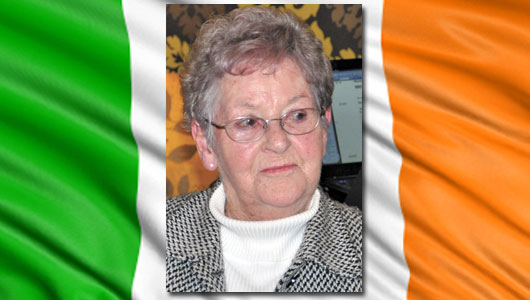 MURIEL BARR passed away at the Foyle Hospice in Derry on 12 January and in her passing the republican community lost a woman of Ireland in every sense of the word.

Muriel was born in Limerick into an old established Irish family, the O’Farrells. Her maternal grandmother was one of the Considines of Ennis. Both families had strong connections to the Irish language and history and Muriel grew up listening to stories of the Famine and landlordism and the hardships the people of Limerick and the surrounding areas endured during those times.

The family moved to Derry during the Second World War and it was there that Muriel met her husband, Hugh. They were married in 1955, a grim period in terms of housing and unemployment in nationalist areas of the city due to the gerrymandering of the electoral boundaries by the unionist-controlled Corporation.

Both Hugh and Muriel would later become active supporters of the Derry Housing Action Committee. As the unionist state cracked down on the civil rights movement, Muriel and Hugh were to the forefront of the marches and protests. Eileen Doherty, whose home became the meeting place of the Citizens’ Defence Committee, recalls opening her door one morning to find a small woman standing there who simply said: “I’ve come to help.”

Muriel literally moved into 10 Westland Street, cooking and feeding the people who thronged the house during the Battle of the Bogside when the entire nationalist community rose in revolt against the RUC and the B-Specials attacks.

Muriel joined the Pádraig Pearse Sinn Féin Cumann in 1974 and continued her work for the community in the advice centres in the Brandywell and Bogside.

As internment ended and was replaced with the conveyor belt system of the Diplock Courts and the H-Blocks, Muriel joined the Relatives Action Committee, protesting against the treatment of prisoners in Long Kesh and Armagh.

The death of her husband, Hugh, in 1996 profoundly affected Muriel but the loss of her campaigning and life partner did not deter her from giving her full support to the Peace Process. She worked tirelessly during the various election campaigns and, despite failing health, was still canvassing in the months prior to her last illness. Her big regret was that she was unable to be present at the send-off for Martin McGuinness in his bid for the Presidency.

We will miss this woman of Ireland, the Limerick accent that at times cut the feet from under us, the sense of humour and wit, but most of all we will miss the spirit of a woman, who believed, like Bobby Sands, that ‘everyone has a part to play’.