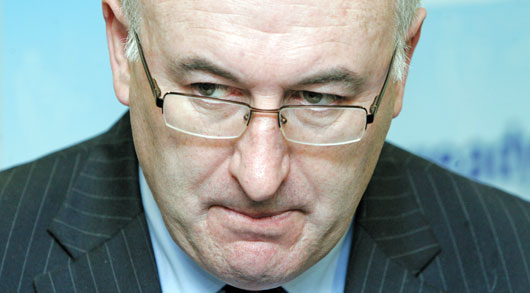 ‘Yeah, a collection team is it?’ the man from Clare County Council had mocked. ‘And how am I supposed to pay for them after you cut local government funding by 84% in December, huh?’

THINGS are looking ominous in the state-of-the-art underground bunker buried beneath the Department of Environment offices at the Customs House in Dublin.

Phil Hogan stares blankly at the digital display on the walls showing the number of people registered for the Household Charge and chews his lower lip.

From time to time, his eyes flick nervously to the red telephone on his desk, a hotline to his political masters in Berlin and Paris. A week to go to the closing date for registration and the numbers were low — far too low.

The bosses aren’t happy. The last phone call from Berlin had been . . . unpleasant. Phil had been forcefully reminded that the German bankers only allowed him to stay in power (with that ‘blank-faced clown’ Kenny as an unconvincing frontman) so long as he kept delivering. No more Irish money for German bankers = no more Phil Hogan.

‘You will be kaput, Phil,’ the last call from Berlin had said. ‘You know what ‘kaput’ means, don’t you?’ (‘Fucked’, thought Phil to himself. It means ‘fucked’.)

The whole thing had been a mess from start to finish. Even the supporters of the charge had to acknowledge it was unfair to tax the wealthy the same as people on low incomes. They’d forgotten to publish the legislation in that nonsensical dead language that the Shinners are always speaking but which won’t be the official language of the state for much longer once Phil gets a free minute to sort that out. You’d think Cromwell and the Brits would have got rid of it when they were here.

The leaflets hadn’t gone out because the leaflet company they’d hired to do it had gone bust. Some bloody economic recovery, thought Phil.

Now the pinkos in Labour were starting to get watery. In fairness, Gilmore was well on board. A man who had taken orders from Pyongyang as a member of the North Korean Workers’ Party’s Irish affiliate knew how to tug the forelock when the bankers came calling.

But to take lectures from Joan Burton about how the deadline was too ambitious and that blathering Cork nobody Ciarán Lynch telling him he should have allowed people to pay down at the post office (if they still had one) was a little much. Labour, Phil thought, would do well to remember their role in political life in this country was to enable Fine Gael to govern and go back to sitting quietly on the backbenches.

He sighed and reread the orders in front of him again. All councils were being instructed to organise ‘collection teams’ that would go door-to-door hunting for people who hadn’t registered. It sounded fine on paper but it was up to the councils to organise and this was causing problems.

The man from Clare County Council hadn’t pulled any punches. ‘Yeah, a collection team is it?’ he’d mocked. ‘And how am I supposed to pay for them after you cut local government funding by 84% in December, huh? Do you think they’ll do it for the sheer joy of demanding money from their neighbours you big baldy boll . . .’

Phil had hung up then. Leo Varadkar muttered something about putting his name on ‘the list’. Phil wasn’t sure what this ‘list’ was but Varadkar referred to it a little too often for his liking. He’d also made it clear to Phil that he thought the collection teams idea was too soft.

Suspicious of the fact that the council employees would be public sector workers and therefore likely to be unionised and possibly working class, Varadkar was arguing that officers be appointed from among the Blueshirt elite to keep them in line. He’d also suggested the officers should be issued ‘registration enforcement devices’, which sounded good until Phil realised Varadkar was talking about revolvers.

Phil lifted his head from the orders for the councils and looked over across the bunker to where Varadkar was sitting quietly by himself, in the dark, listening to Wagner.

Always fecking Wagner, Phil thought, seeing it as a transparent ploy on the younger man’s part to ingratiate himself with their German overlords. Phil followed his sidekick’s eyes to the other wall, the one without the digital display, the one with the pictures of the traitors — the Shinners and Lefties, the socialists and the trade unionists. All the degenerates and lawbreakers that plagued his every waking moment with their campaign against the Household Charge.

‘Tiocfaidh ár lá!’ Adams’s crowd were always saying. Oh, yes, said Phil to himself, their lá would certainly tiocfaidh once this Household Charge was sorted out. Oh, yes indeed.