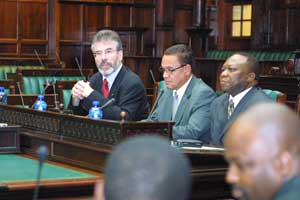 Laying a wreath and lighting some grass and incense — the 'impepho' — in memory of all of those in South Africa and Ireland who have given their lives in pursuit of freedom was a poignant start to what was a busy but productive visit by Gerry Adams to South Africa.

The Sinn Féin President arrived in Johannesburg on Tuesday where he was greeted at the airport at the start of his official visit by the Minister of Intelligence Ronnie Kasrils and Police Commissioner Robert McBride. From there it was on to Freedom Park on Salvokop Hill in Pretoria, a world-class heritage centre, still under construction, intended to express South Africa's pride in its past, incorporating a national monument, state of the art interactive museum and memorial gardens.

The Isivivane is the symbolic resting place for all those who died in the struggle for a free South Africa. Inside is a circle of eleven boulders, one for each of South Africa's nine provinces, one representing the national community and one the international community.

Dr Wally Mongane Serote, CEO of the Freedom Park and one of South Africa's best known writers and poets, in his introductory remarks at the entrance to the shrine told Gerry: "The Isivivane which you will see in a few moments, honours past heroes and heroines who laid their lives down so that could all enjoy the freedom we have today. After you have laid your wreath at the international boulder you will have honoured Ireland's fallen heroes and heroines forever."

After holding an 'ukuphahlia' or conversation with the ancestors Gerry laid his wreath. Speaking to the assembled guests and dignitaries he said: "South Africa has lit a beacon for freedom loving people throughout the world and the work that you have done here at Freedom Park isn't just about commemorating the past. It is also about the future and hopefully people across the world uniting in our diversity around the ideals of freedom and equality and justice."

After a reception at Freedom Park it was off to the residence of the Irish Ambassador Gerry Corr for a brief, private discussion with the Commissioner of the South African Revenue Service Pravin Gordhan before a meeting with representatives of the Irish religious community working in South Africa. These included Fr Barney McAleer from Tyrone and Fr Kiaran Creagh from North Belfast. The lunch concluded with Fr Barney giving a rousing rendition of The Mountains of Pomeroy.

From there it was another long car journey in the blazing summer sun back to Johannesburg and a meeting in Luthuli House, ANC headquarters, with a delegation of ANC National Executive members. Gerry took the opportunity to thank the ANC again for all their help and solidarity over the years.

At the Presidential Guest House in Pretoria Gerry met Foreign Minister Dlamini Zuma. The two held a lengthy private meeting before a joint press conference. Afterward Dr Zuma made clear South Africa's willingness to assist the search for a just peace in Ireland.

Wednesday morning opened with Gerry's first-ever official visit to the Headquarters of a State Intelligence Agency where he again met with Ronnie Kasrils. They discussed how South Africa's contribution to the Irish Peace Process could continue. TV and radio interviews followed before a return to Pretoria for the most important meeting of the official visit with South African President Thabo Mbeki at Union Buildings.

Gerry presented President Mbeki with a bog oak carving of Cúchulainn along with several GAA jerseys, including signed jerseys by the Tyrone Senior and Down Minor football teams. Speaking afterwards to the media in the open square inside Union Buildings President Mbeki said that the IRA's recent initiative "opens the way for the full implementation of the Good Friday Agreement". He added: "It is our hope that this historic step taken by the IRA is a strategic contribution to opening the way to the re-establishment of the government."

Remarking on the difficulties presented by a process of change and on the South African experience President Mbeki said: "We might find that the unionists are afraid of what they might lose by this change, having been accustomed to particular things. Take the experience of this country. It was the same experience. The white minority were afraid of change in case they might lose something but now we find eleven years after they are all saying that wheat we feared we would lose we did not lose. We are happier. We are freer. We are more secure. We are richer. There's no sense of someone coming to stab us behind our backs. I think that if we move the Peace Process in Ireland forward people of this point of view will discover that that future is indeed a much better one for everyone." He added: "It is the responsibility of everyone to move" and "it can be done it must be done".

Expressing gratitude to the President and the South African Government, Gerry Adams said republicans in Ireland want what South Africans already have — "freedom, a rights-based society and we want especially for the people of our small island to live together in peace and in harmony".

On Thursday in Capetown Gerry was given a very warm reception at a joint session of Parliament. He took the opportunity to raise matters of global concern, as well as to brief politicians on the Peace Process. He called for "a united nations which can assert an agenda which reflects the true needs and interests of the peoples of the world".

The final day involved travelling to the Love of Christ Ministries which runs a hostel for abandoned babies, some suffering from HIV/Aids. It was an emotional and uplifting experience. A team of volunteer workers from around the world help look after the children. It is a mammoth undertaking which also includes the running of a small school. Speaking afterwards Gerry Adams praised the dedication of Fr Barney McAleer and all involved in this project.