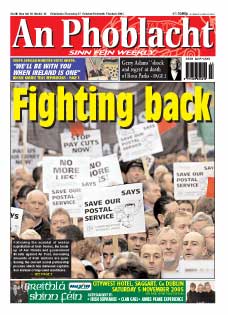 Postal workers stand up to Dempsey

As an An Post wage dispute exposes the willingness of the government to ignore Partnership when it suits its purposes, the decision of the Irish Congress of Trade Unions (ICTU) to defer a decision on talks piles the pressure on the ailing Partnership model.

The Communications Workers' Union (CWU) decides next week on the type of industrial action 10,000 workers will take over the company's refusal to deliver a €30 a week pay increase due two years ago.

With an huge turnout, 90% mandated industrial action, up to and including strike action despite bullying and threatening behaviour from Minister for Communications Noel Dempsey.

Communications Minister Noel Dempsey responded over the weekend at the Fianna Fáil Ard Fhéis blasting workers with threats to privatise the company and bizarrely alleging workers can do delivery rounds in three-and-a-half hours while being paid for seven-and-a-half, a claim dismissed by CWU National Officer Seán McDonagh.

"He is either very badly advised or has a complete lack of understanding of the work our members are doing," McDonagh told An Phoblacht. "I would be delighted if the Minister and his officials wanted to come along and perform a delivery to get an idea of the kind of work we do and the pressure employees are under.

"In fact since 1998 there has been an agreement with An Post management that inspectors can travel with delivery persons if that person is overloaded with post or is underscheduled, meaning that he or she is delivering less than they could," he continued. "Our problem is getting An Post to send out these inspectors, but if the Minister and his officials wanted to make some deliveries, I would be delighted to help him out."

McDonagh also pointed to a freeze on recruitment as part of the problem. "Minister Dempsey is complaining about late deliveries of mail," he pointed out. "The reality is that since September 2003 there has been a freeze on recruitment to An Post and during that time we have lost 600 workers, which is a significant enough proportion of a workforce of 10,000, and this has resulted in increasing volumes of mail being dealt with by decreasing numbers of workers."

The An Post dispute is another example of government reneging on commitments under Partnership to the detriment of workers. A pay increase that should have been delivered two years ago is now conditional on changes in work practices that were the subject of completely separate negotiations.

The decision of ICTU's Special Delegate Conference on Tuesday to defer a decision on participation in partnership talks was endorsed unanimously by 400 delegates. Congress General Secretary David Begg said "the timing is not right" for new talks and that more work needed to be done. He condemned employers for their silence on key issues such as Social Dumping and poor compliance with agreed employment standards. Such practices were, he said, "neither morally acceptable nor socially sustainable".

The decision was inevitable following the announcement on Monday by SIPTU, Ireland's biggest union, that it would not enter talks in the absence of specific commitments and legislative changes to address the issue of displacement of jobs and exploitation of workers, especially foreign workers and immigrants.

The 18-year-old Social Partnership model faces one of its stiffest tests with the anti-Partnership rhetoric from SIPTU's conference in Cork earlier this month questioning the purpose of a system that would permit Irish Ferries to replace over 500 unionised Irish workers with cheap foreign labour at €3 an hour.

SIPTU President Jack O'Connor, a long-time supporter of Social Partnership, finds himself facing increasingly militant anti-Partnership sentiments from grassroots incensed at the break up of Aer Rianta and the Irish Ferries dispute.

Outside SIPTU, the decision of Mandate to refuse to enter Partnership negotiations, along with threats to do the same from the Irish Nursing Organisation and the Irish Bank Officials Association and the confrontation at An Post could yet be enough to break a Partnership model that delivers for management at the expense of workers.