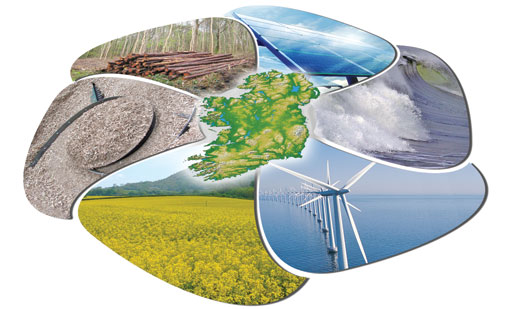 MANY PEOPLE believe that renewable energy is a relatively new development in Ireland but water-powered grain mills were in use in Ireland in the third century and it was Irish monks living at Strangford Lough who are credited with inventing the tidal-powered grain mill in the seventh century.

Towards the end of the 1800s, Killarney became the second urban area in the world to have electric streetlights with the power coming from hydro turbines at Flesk Mills just outside the town.

In 1925, the Irish Government committed 20% of its entire budget to building the Ardnacrusha hydro power station on the Shannon. When completed in 1929, Ardnacrusha was capable of meeting 100% of Ireland’s electricity demand. Ardnacrusha was also the largest hydroelectric scheme in the world, retaining this title until the Hoover Dam was completed in 1934.

The ESB was created in 1927 to build and manage both the Ardnacrusha plant and the power grid to supply the state’s electricity.

Ardnacrusha is still in operation today, some 83 years later.

Ireland already provides around 11% of its annual electricity needs from wind and current government policy is that by 2020 we will provide 40% of the island’s electricity from renewable sources. However, if we are serious about addressing fuel poverty, about getting true security of supply and about making the most of the economic opportunities that lie in renewable energy, we must aim for much more challenging and rewarding targets.

If Ireland could generate all its own electricity in the 1930s using a single hydro-electric plant, then why, almost a century later, can we not aim for and achieve such a feat?

With the massive abundance of clean, sustainable and ultimately infinite natural resources we have through wind, wave and tidal, it is sheer madness that we continue to rely on expensive and carbonintensive fossil fuels to generate electricity through coal and gas power stations.

There needs to be a serious shift away from protecting the fossil fuel industry and an immediate realisation of the potential that lies in front of us.

Ireland has more than three times its total energy requirements available from renewable energy sources – all we need to do is harness them.

There are challenges to get the right mix of energy generation on the island, and there is a cost involved in the upgrading of the grid in order to achieve this. It has to be maintained and reinforced regardless of how much renewable energy we have, so we need to look at what will deliver real economic benefits for people in terms of jobs, investment and long-term protection from increasing energy costs.

Scotland is leading the field in terms of renewable energy generation, so we should look to them for inspiration. One of the most important things they have done is to set the challenging target of becoming a net exporter of electricity by 2020. The current government targets on this island that 40% of electricity consumption in 2020 will be from renewable sources are lacking in ambition.

I see no reason why we cannot set equally ambitious targets and aim for a similar timeframe. After all, we have a greater abundance of clean renewable energy sources on this island than Scotland does so I am proposing that Ireland should have an aim of becoming a net exporter of renewable electricity by 2020.

At current market prices, more than €100billion worth of potential energy crashes into our coastline or blows across Ireland every year. This energy does not have a direct fuel cost and so it can be price stable in the future.

The exploitation of even 15% of this energy would drastically change our economic position and establish a new industrial sector that would create thousands of sustainable, well-paid jobs as well as reducing our carbon emissions and remove our dependency on fossil fuels.